The Museum of Ancient Preserves 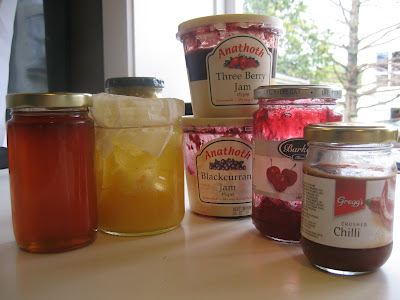 I don't know about you, but it seems that our family can never get to the bottom of a pot of jam. Somehow the preserves work their way inexorably to the back of the top shelf of the fridge, behind the jars containing a single pickled gherkin and the myriad half-used bottles of children's paracetamol; they wait there for a while, unregarded, sticky-sided, pushed ever further back by shiny new jars jostling for attention at the front of the shelf; and there they quietly expire, to be found six months later crystallising at the edges and growing little green mould islands.

Here's the current line-up of my museum of ancient preserves:

1. A half-eaten jar of Barkers Morello cherry jam, purchased by myself with visions of great juicy sophistication, but in the event sadly lacking in both cherries and flavour, and now pushed to the rear by a spanking new Anathoth 'Three Berries' chosen by the small guy;

2. A full jar of crabapple jelly in a divine shade of pink, made by my stepmother, which cheers me up everytime I look in the fridge and is just too beautiful to open (but I really should);

3. A partly-eaten jar of lemon curd made by myself in an uncharacteristic Martha Stewart-ish frame of mind one wet winter day, which tastes OK but which no one seems to fancy much;

4. An Anathoth blackcurrant jam pottle, which has been very nearly scraped clean but nonetheless returned to the fridge to harden at the back; and

5. A jar of crushed chillis, purchased from the supermarket as my enormous bag of dried ones from Moore Wilsons has now run out; the mould upon which would keep a field hospital in penicillin for a week.

As you will gather from all this, I am not the world's greatest housekeeper: a fact which was brought home to me with a vengeance some months ago, when, out of the corner of my eye, I saw a gigantic rat squatting at the back of the fridge. When I could bring myself to open the door again, I realised it was actually a large aubergine I had bought and forgotten some weeks earlier that had grown long grey fur in the interim.

This is by way of preamble to introducing the latest acquisition for the museum of ancient preserves; a gift from a friend who, in town recently for Scape, came to lunch and brought round a home-made confection she had bought earlier that day from an old lady at a market. 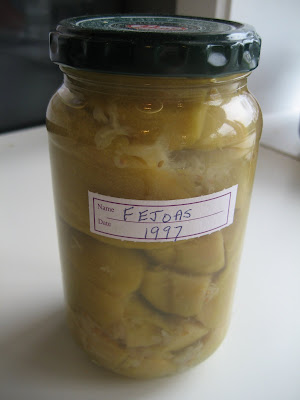 Everyone was a bit nonplussed.

"Oh dear, I hadn't noticed," said our friend. "But perhaps she meant to write 2007 on the label," she went on, hopefully.

"It might be OK. Probably quite nice. We could try it later," I said weakly, transfixed by the bubbles under the lid.

"It looks like something from the Otago Medical Museum," said someone else, a little unkindly.

We haven't tried them yet, and may well not, but equally I can't bring myself to simply throw them away. (Too much care and kindness in both the gift and its original, long-distant making.) Instead the jar of "fejoas" has sat on the kitchen windowsill for the past couple of weeks, turning itself slowly into an artwork (an enigmatic object of contemplation rather than of use). Its taxonomy is slightly different from my other fridge exhibits -- this jar didn't grow old on my watch -- but its provenance, 'Installed during Scape 2008', is decidedly more salubrious.

It's occurred to me that perhaps it's not the first time this particular jar has been sold and bought and given. Relational aesthetics? Something like that. The wandering lines described by an eleven-year-old pot of stewed feijoas on its travels across the city. If anyone can suggest where it should go next, I'd be pleased to hear from you.
Posted by Cheryl Bernstein at 1:28 PM

Perhaps you could send it up to me? I've only just really discovered preserves having been somewhat deprived for my entire life. I can probably count the number of sweet preserve encounters on one hand! Some fermented feijoa maybe just what i need...

Hmmmm. I'd be happy to send you the feijoas (Agnes c/- AUT? let me know) but I strongly recommend you don't eat them! Maybe you could blog about what you do with the jar? If we were feeling cheeky we could consider it as a satellite programme of Scape.