For some players, luck itself is an art 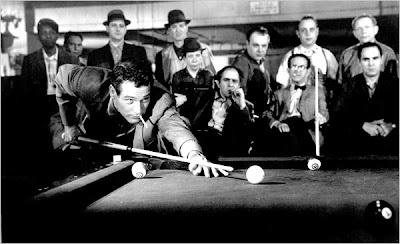 I was in my late teens in 1986 when Martin Scorsese's The Colour of Money came out. It provoked an obsession with playing pool which lasted for nearly the next decade, though I was never any good at all. But then, compared to various friends, I was a very late starter: it's been my experience that people who are gun pool players have either had seriously mis-spent youths, spent a lot of time at Christian youth clubs, or in the third option, have worked at the Auckland Art Gallery, where for many years a pool table was an agreeable feature of the staff lunch room (wonder if it will be reinstalled in the new building?). I fell into none of these categories.

Tom Cruise was all very well (and famously played most of his own shots, which was a piece of method acting I could only admire), but it was obvious that the real hero of The Colour of Money was Fast Eddie Felsen, played by Paul Newman. I hadn't seen The Hustler, the movie he'd made in 1961 which became the prequel to The Colour of Money, but a few years later, when we finally got a video player, I rented it and was completely captivated by Newman's performance; the way, I think, that he made such an flawed character so utterly compelling.

I'd seen a lot of other movies Newman had made when they came on TV in the late 70s and early 80s. Hud, The Towering Inferno, Butch Cassidy and the Sundance Kid, The Sting: my father was an enormous fan and the movies came highly recommended (in fact were required viewing in our house). The very best Newman movie of all, though, was Cool Hand Luke, which came out in 1967 and which I would have first seen about a decade later: and like much of the culture consumed in my childhood, was no doubt most unsuitable for children. The sick-making hard-boiled egg eating scene; the cutting-the-heads-off-the parking meters scene; the sweatbox; the irrepressible smart mouth in the face of abusive authority; the crushing humiliation at the hands of the big boss; the tear-jerking death scene with its symbolic crucifixion. "What we got here is a failure to communicate..."

Paul Newman, who died on Saturday, was a member of the same generation as Colin McCahon, Charles Bukowski, Federico Fellini and Richard Hamilton: in their various different ways, all anti-heroes of the counter culture, debunkers of complacent authority, born in the years immediately following the First World War. Thinking about him over the weekend, I've realised just how surprisingly many images and moments in the wild soup of culture I carry round with me feature Paul Newman.

Here he is singing Plastic Jesus in Cool Hand Luke.

Posted by Cheryl Bernstein at 9:50 AM

Cool Hand Luke is my fav Newman movie too. And I love that song - although the Mojo Nixon/Jello Biafra version is the best IMHO