Beautiful inside my wallet forever 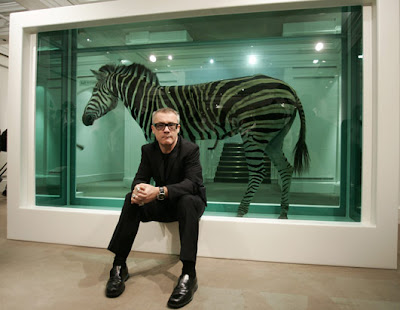 So the Damien Hirst auction at Sotheby's is over, and the artist -- already Britain's wealthiest, apparently -- has walked away squillions of dollars richer: although we don't know how much richer exactly, as the terms of Hirst's financial arrangements with Sotheby's are a closely-guarded secret. The media coverage has been intensive, and Hirst has been skilled at whipping up a feeding frenzy of publicity around the sale, tossing out throwaway one-liners like chum in the water.

Thus we know that last week, for example, Hirst had a bad dream that everything turned to crap and no one bid: "I imagine it going: 'Lot 9 — no bids. Lot 10 — still no bids?'" he said. "But, whether it works or not cash-wise, the door will stay open." 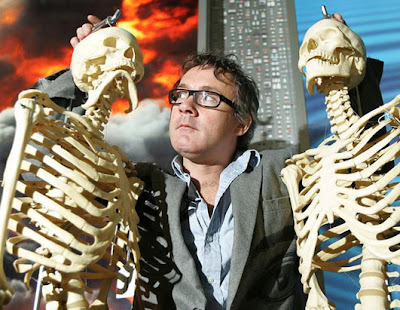 In the event, Damien Hirst's fear of failure proved unfounded -- or perhaps simply another shrewd piece of positioning. Some commentators have suggested that the risk of a huge public flop was minimal, if any, given the heavyweight calibre of the players.

No one knows for sure how it all stacked up, though the tactics speculated about variously include minimum price guarantees from the auction house, buy-ins by his dealers, and possible incentives paid to dealers by the auction house. Hirst disclosed to Bloomberg's Scott Reyburn that he wouldn't be paying a seller's commission on the auction. (Reyburn suggests that on the hammer total of 95.7 million pounds, Hirst is set to pocket about 50 million pounds, after deducting his manager Frank Dunphy's commission and his own production costs.)

The day before the sale, the Financial Times suggested it didn't really matter which works sold: that the auction, Beautiful inside my head forever, was a cultural extravaganza that in the final count wasn't so much about the art as about the art market, an event which represented "the apogee of [contemporary] art's collusion with greed and bling".

"With Mr Hirst's open-mouthed shark and glittery-banal skull and bull its emblems, art history of the past 20 years is distinguished not by a dominant movement or style - that is impossible with the new global pluralism - but by the unprecedented, unstoppable, absurd, obscene rise of the art market itself. "

Not for the first time, I wish for a little more collusion with greed and bling by contemporary New Zealand art's promoters.
Posted by Cheryl Bernstein at 9:34 AM

Email ThisBlogThis!Share to TwitterShare to FacebookShare to Pinterest
Labels: art and money, art and the media, Damien Hirst