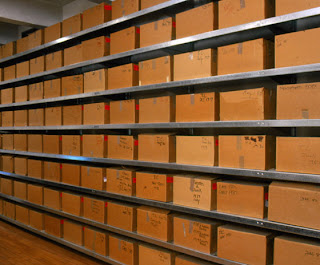 Gee, I'm a sucker for this kind of thing. The image above is from the Archives Study Center at the Andy Warhol Museum in Pittsburgh. It shows just a fraction of the 610 cardboard file boxes which Andy Warhol filled each day with the detritus of his life: beginning in 1974, he started chucking it all into a box under his desk, sealing each one up with packing tape when it was full.

"What you should do," he said, "Is get a box for a month, and drop everything in it and at the end of the month lock it up. Then date it and send it over to Jersey." And he did. The Warhol Museum have painstaking been cataloguing the contents of the boxes, in both words and pictures: you can see some of the surprisingly beautiful results here. 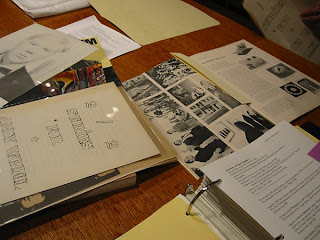 I'm always interested in artists' source material: every time I'm in someone's studio I can't help myself checking out what they're reading, what they're looking at, what they're listening to. But it's rare that this kind of material gets back into the public domain, which is a great pity: you find out a lot more not only about the artist's work, but about the transformative quality they bring to bear on the world, from looking at the source material the artist's used.

When the City Gallery in Wellington showed the big Keith Haring retrospective exhibition from the Whitney Museum of American Art in 1999, for instance, a case of ephemera was exhibited with the early work, full of doodles, clippings, photocopies and photos: it grounded the finished work you saw in a practice, which saw the world in a particular way and transformed it into a particular kind of image and idea. It made me like his work a whole lot more. 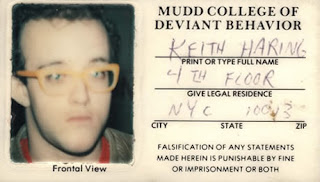 The enormous quantity of file boxes Warhol left behind should be -- like the Haring archive -- a biographer's dream, but somehow it's not: there's just so much stuff, filed without hierarchy -- taxi receipts dumped on top of sketches, polaroids on top of fan letters -- that instead it becomes a serial work rather than an informational archive, all about surface and excess and the sheer incommensurability of modern life. Which in a way, is exactly as it should be.

I'm looking at the surface of my own desk tonight, strewn with correspondence and bills and receipts and articles and books I should read but haven't yet and probably won't ever get round to; and I'm wondering if I shouldn't invest in a filing box or two and some packing tape myself; while at the same time I'm reminded of the advice an art museum director of my acquaintance gave me some years ago. He was talking about the great difficulty of simultaneously keeping up with both the movements of the art world and with the sheer volume of correspondence and reports required of him as a public servant.

"My technique," he said, "Is to put everything in a pile. Then I leave it for a month. If it's important, the person will ring me to see why I haven't answered their letter. If it's not important, then I can throw it away after a month and feel good that I haven't wasted my time answering it."

(Mind you, this was a world before email. But I think the principle may translate.)
Posted by Cheryl Bernstein at 8:10 PM