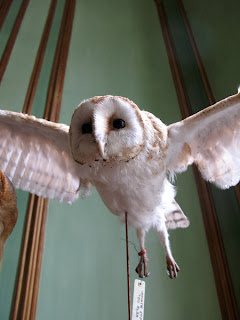 When the world's greatest taxidermy establishment, Deyrolle's of Paris, went up in flames earlier in the year, first on the scene after the fire brigade had left were the artists.

"The animals had undergone a second death, in a sense, and the visitors were both captivated and deeply touched," wrote Olga of Greece, entomologist, in her account of the conflagration. (The first three images are from Deyrolle's website, taken before the fire.)

"First to arrive was the artist Anselm Kiefer, newly resident in Paris, followed by photographer Nan Goldin, a longtime Parisian. Goldin arrived in a pair of tight jeans and very high heels, which she was politely asked to change; Françoise was afraid that she would sink into the mud and ash. Goldin came back better equipped, to take photographs. Sophie Calle also came to photograph the burned interior. The Chinese artist Huang Yong Ping arrived and proposed taking all the damaged animals for an installation. There were others: the painter Miguel Barcelo, photographers Karen Knorr and Jean Baptiste Huynh, and the artist Marina Karella." 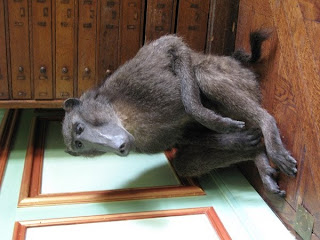 Somewhat oddly for a vegetarian, perhaps, I have a distinct weakness for taxidermy myself; my small collection includes various sets of bull's horns, a dried sea horse, antlers, and a pair of matching pine martens with bared teeth mounted on branches, which my brother-in-law purchased for me at the Hawera auction rooms in Taranaki. He recently rang up about a stuffed snake he'd seen coming up for sale; we were keen, but in the event it went for hundreds of dollars. However, the big guy has officially banned any further additions to the home menagerie. (We'll see...) 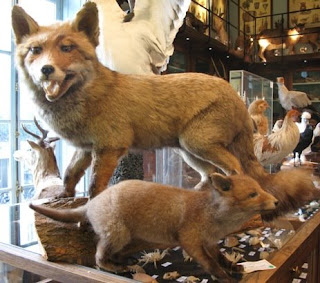 Many artists of my acquaintance are also interested in taxidermy, though not many use it directly in their works. I think their interest has something to do with the imaginary worlds immediately conjured up by stuffed animals. However, there have been a few notable New Zealand artworks employing taxidermy: you might well count Bill Hammond's images of Buller's birds, especially Buller's Table Cloth, in the collection of the Auckland Art Gallery, pictured below; there's Peter Robinson's legendary possum log, from the early 1990s, made of skins he'd cured himself (I think); the myriad sparrows and rabbits of Michael Parekowhai's Beverley Hills Gun Club series, and his Driving Mr. Albert, from 2005; and perhaps most notoriously, Francis Upritchard's family cat.

Here's what Upritchard had to say about another taxidermied work she made for a show in 2003:

"There's a snake, Ourobouros, eating its own tail. A white albino python, which I taxidermied, so it's a real python. I've got a friend who is a taxidermist who got me the body, so I did it in his workshop. I filled it with foam filler. The snake itself is a bit confused. I've done a lot of drawings of snakes in the past, but I've never seen a snake. In New Zealand you have no snakes. So I've drawn the eye down where a whale's eye is, down the side, where the mouth is. And then when I got the snake it was like 'Oh God, its eye is at the top', so it doesn't look like my snake drawings. So I sewed up the eyehole and made a new one. It's very over-stuffed and bulky, it looks like a funny old turnip, you don't look at it and think 'Hey, what a sexy snake'. It's like a stupid lumpy old thing." 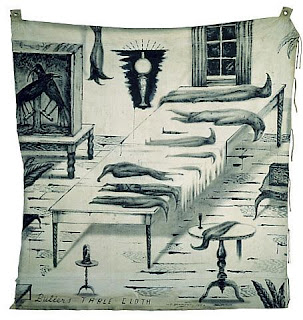 The purpose of taxidermy is, of course, to make a dead thing look as life-like as possible. (Upritchard, however, has something else in mind: "Look, I'm making these to look as bad as possible, as badly made as possible - I'm not glamorising them... I'm interested in a critique of taxidermy, making things look as dead and pathetic as possible.") Beyond all the slightly alarming techniques of the profession, taxidermists have traditionally achieved life-likeness in one of two ways; either by arranging the animal to look as if it is still alive in its natural habitat -- as if a bird has momentarily alighted on a branch, perhaps -- or by creating an anthropomorphic tableau in which the animal plays out a second life -- a rabbit displayed in a hunting jacket with a miniature rifle tucked under its arm, for instance.

Anthropomorphic taxidermy reached the height of its popularity in the late Victorian and Edwardian eras; among its foremost practitioners was the extraordinary Walter Potter, of Bramber in Sussex, who specialised in large scale, complex human dramas "acted out" by vast numbers of small dead animals. His sentimental Kitten Wedding featured twenty farm kittens, while 34 guinea pigs were stuffed for his Guinea Pigs Cricket Match. His most famous work, The Original Death and Burial of Cock Robin, is pictured below. (The picture is borrowed from A Case of Curiosities, an excellent fine art taxidermy site.) 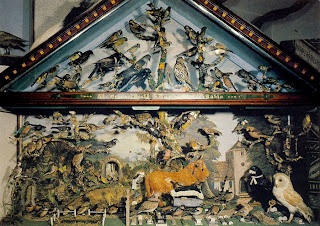 I could go on about this stuff all day. But I probably shouldn't. Can't wait to see what Nan Goldin and Sophie Calle will do with their shots of Deyrolle's, though.
Posted by Cheryl Bernstein at 7:30 AM