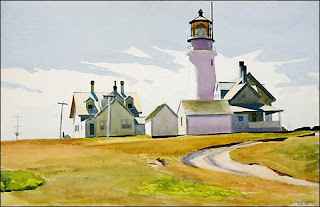 
I've written before about the way in which certain artists come to "own" the views which inspire their work, to a point where it's almost impossible to see a particular landscape except through their eyes. Think of Edward Hopper's Cape Cod landscapes; Ed Ruscha's LA; Arthur Boyd's Wimmera. There are dozens of New Zealand examples: Toss Woollaston's high vantage point across Wellington Harbour, which he experienced in a sort of muddy atmospheric cubist frenzy, and accordingly now so do I; McCahon's tablet-like clifs at Muriwai; the slight edge of craziness in the swirling skies of Bill Sutton's rural Canterbury churchyards; the surprising delicacy of Bill Hammond's Boulder Bay in Lyttelton Harbour, with its whispy birds and plumes of spray; the doughty resoluteness of Michael Smither's stony Taranaki beaches banking up his glimpse of the mountain.

Years ago I was driving through Provence when I saw a familiar landscape appear like a mirage in the distance. "It's Mont Sainte-Victoire!" I said excitedly. "You know, that mountain Cezanne painted a lot." Until I saw it I'd had no idea where it was, or even, stupidly, that it was a real place: I'd never thought about it. I felt ridiculously pleased: seeing the view framed in the windscreen was like owning my own personal version of the paintings, until the road turned a corner and it was out of sight.

The extraordinary thing was that what I saw from the car looked just like the paintings, an arrangement of angles and planes and edges softened by a golden haze. I wasn't long out of university and had "done" Post-Impressionism twice, once as part of a stage one French culture course and again as part of Art History (bet it doesn't feature much in either today). Of course everything was taught by slides: there were no real works of art to look at. Driving through the French countryside I realised that my understanding was completely at fault, and that Cezanne, at least, was much more of a realist than I'd hitherto assumed. (Ditto Hammond, when I took a walk down to Boulder Bay.)

On a visit to Christchurch once, I had a similar experience of encountering a landscape I was already familar with from a painting. I was driving through the old streets of the eastern central suburbs, trying to find an acquaintance's studio, hopelessly lost. Going through an intersection, I looked to the right towards the hills, and suddenly saw Doris Lusk's Pumping Station. It looked exactly like the painting. Just as suddenly, it was gone, and I've never seen it again. 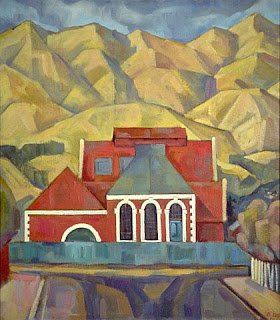 Doris Lusk, The Pumping Station, 1958, oil on board, Collection of Auckland Art Gallery

Built in 1882, the Christchurch Pumping Station (it pumps the city's sewage along the pipes out to Bromley) is now a protected building. The city council with the poorest record in the country of granting non-notifiable resource consents (effectively letting developers knock stately old buildings down before anyone else finds out about it) couldn't knock it down, even if it wanted to: Lusk's view is safe. (Now, if only I could find it again!)

But not so Edward Hopper's view of Highland Light and the keeper's house at Truro, Cape Cod, which inspired so many of his works. The NY Times has a piece about the zoning consent which has just been granted to owners of the section next door to the house once owned (and designed) by Hopper and his wife Josephine, to allow them to build a 6,500-square-foot trophy house, which will effectively block the barren view made into one of the iconic images of American art by Hopper. It's being done in the teeth of opposition from local residents, who say there are two types of people that traditionally live in Truro: fishing people and artists, and landmarks are important to both.

It's a vain hope, I guess, to suggest that landscapes which artists have made famous should be protected from development. But in this instance, it does seem a bit of a pity. 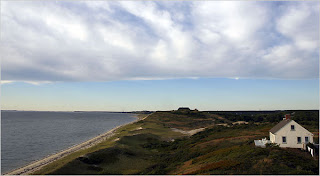 Hopper used to drive around the Cape a lot to find locations to paint; he often painted from his car, a two-tone Buick sedan, in which he had had the green-tinted windshield and windows replaced with clear glass. An article in Time magazine in December 1956 in which he was interviewed at his Truro home commented that his paintings look as if the viewer is travelling, somehow:

"By suppressing all details that would not be noticed in a passing glance, and arranging his compositions to suggest that the scene extends far beyond the frame, he puts his picture window in motion. Seeing a Hopper exhibition is like floating through people's backyards on a slow local, in a state of awed awareness."

Unlike the new neighbours, one of the current owners of a house painted by Hopper says she feels an obligation to keep the house as it was, given the numbers of people who come to photograph and paint it themselves, following Hopper's trail around Truro. You can compare the paintings with the locations as they are today in this New York Times feature: or click here for an interactive 360 degree video view from the Hopper house. Might not look like this for much longer.
Posted by Cheryl Bernstein at 4:54 PM