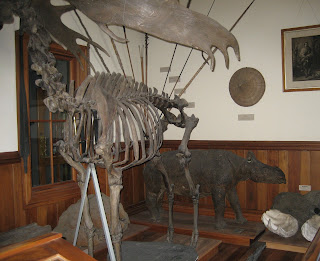 Canterbury Museum's Victorian Room: the best "dusty old museum display" in the country and one of my favourite places in the world. (The famous vegetable sheep is behind the moose skeleton and to the left of the stuffed pigmy rhino -- or whatever it is; just behind the facsimile of the Rosetta Stone.)


Years ago, when Te Papa was still a glittering neon twinkle in the eye of its spruikers, I went to a talk by poet Ian Wedde, who had recently signed on to the project team, about its conceptual development. It was a terrific dissertation, full of typically image-laden metaphors and incidental histories. Ian's method, as I recall, was to speak from personal experience, finding in the events of his own life practical demonstrations of the philosophies of museums he was discussing. I found it compelling, yet also somehow slightly outrageous. At this remove, I remember him talking about sitting with a girl on a bench in the Black Forest in the late 1960s as fighter jets flew overhead, though I don't recall how that fitted in to the argument. And I also remember him talking about the "dusty old museum displays" of his childhood.

I don't think I do Ian a disservice here by attributing this quote to him, though it's a phrase which I heard many times on the lips of other people in subsequent years to describe what Te Papa was not. I remember being profoundly puzzled: my experiences in "dusty old museums" were among the happiest and most vivid of my childhood.

Hours, for example, spent in front of the huge Victorian dolls house which used to be on display at Canterbury Museum, and the one in the English cathedral town where I lived as a child, in which I was lost in a perfect miniature world peopled by stiff-limbed dolls who ate shiny plaster hams stuck to china plates. The long strange walk through the cavernous bird halls at the Natural History Museum in London with the feeling of being watched by thousands of eyes, the image of which, in my memory, has become a kind of British Bill Hammond painting. The miasma of creeping horror which rose from the iron torture implements at the Tower of London, still present in the air four hundred years after they were used. Mad museums of Roman masonry in Italy, the pieces all jumbled together with no regard for their age or origins. Measuring one's own child-height against the stuffed Emperor Penguin at Auckland Museum. The strange loneliness of the little Egyptian Mummy in Christchurch, thousands of miles and thousands of years away from its home. The crazy ornithological case at the old National Museum in Wellington in which all the birds appeared to be conversing with one another, which I've written about before.

I can't remember ever feeling bored by all this, or patronised, or excluded, as the new museology promoted by the developers of Te Papa assured me I had. Frequently of course I had no idea what I was looking at (the 'vegetable sheep' in my photo of Canterbury Museum's Victorian room above is a prime example). But neither did I care. With no sense of the 'stories' the museum object might tell (a prime goal of the new museology), I was free to make up my own.

When critics bemoaned the museum's descent from education to entertainment, I felt that they missed the point; museums, for me, were (and are) places of personal discovery, aids to the imagination much like art galleries. They provided a way to see the world through the eyes of someone else, a direct conduit, through the strange objects one encountered only there, to lives lived in another time or another place.

What I did find patronising and very, very boring, however, was the amount of interpretation the new museology required. Endless labels, didactic panels, and even, in the unspeakable Museum of Sydney which was developed at around the same time as Te Papa, talking holograms triggered by the movement of visitors, in which stock characters from Australian history (the convict, the servant girl, the officer, the Aboriginal) loomed out of the darkness and started chatting to you about their daily lives.

I don't know about you, but for me the only thing worse than a hologram in a mob cap telling stories in a dodgy Irish accent is a real person prancing around a museum in costume pretending to be an early settler, or a figure in a painting, or whatever. I feel much the same about people dressed in Easter Bunny suits who approach you in the supermarket, or mime artists in Cuba Mall, or people peddling religion or cheap pizza deals at the front door: a muttered bugger off! seems the only reasonable response.

Which brings me as if by magic to the latest column [full version not yet online] by New Zealand's own cultural curmudgeon, Hamish Keith, in which he remarks on the irony of the title of the first exhibition to be presented under the new administration of Auckland Museum: 'Secrets [Revealed]'. An energetic and rather bristly new broom in the form of new director Vanda Vitali has swept through the staffing structure of the museum. Dozens of jobs have been disestablished; new jobs have been created; and I would imagine that, as in all restructurings I've been through, many of the good people have left because they can, while many of the bad people (and the really difficult ones) have left because they've been made to. The new number two at the Museum is Tim Walker, the erstwhile director of the Dowse in Lower Hutt, who was previously a senior curator at Te Papa.

Keith is concerned that there has been very little public information about the new direction that Auckland Museum is clearly being primed to take. He is particularly concerned to ensure that the hints it has dropped thus far about being more "accessible", "innovative" and "attractive to younger visitors" do not precede a "whizz-bang dumbing down" and development into "an interactive mall" (no prizes for guessing which other museum he's alluding to). He advises the museum to allow its future to be driven by the enlargement and development of its collections, suggesting that it has the potential to become of one the great museums in the world.

I've always thought of Auckland Museum as the anti-Te Papa, a place where you could go to see interesting and rare things rather than displays of computer-cut vinyl lettering contextualising everyday objects. I love both the Museum's original neo-Classical architecture and its neo-brutalist alterations, by architect Noel Lane; somehow the splendid austerity and grandeur of the building upholds the significance of its contents, unlike the jaunty pastel cheeriness of Te Papa, which at some angles looks like a particularly fancy municipal leisure centre. I particularly like the sheer amount of stuff you can see at Auckland Museum. I suspect it's no coincidence that its previous director, Rodney Wilson, was an art historian and art gallery director for most of his career: art people tend to value the physical presence of objects rather more than the social histories which may be prompted by the object. (Keith, also an art person, argues that it's simply a historical accident that the great Maori and Pacific artworks held by Auckland Museum are in its care rather than that of the art gallery.)

I'm with Hamish Keith on this one. Whatever else the regime change at Auckland Museum does, it should concentrate on what is an outstanding collection. Get the objects out on display, and let visitors continue to build personal relationships with them. Bring the magic of the "dusty old museum" forward into the new century, and leave the MDF and talking holograms behind in the last one. The 'Secrets Revealed' exhibition, which includes a kiwi with an albino foot, a completely bald kiwi, a frozen baby orang-utan, a full bottle of brandy from the earliest years of European settlement in Auckland, and -- you guessed it -- a fine vegetable sheep -- actually seems like quite a promising start.
Posted by Cheryl Bernstein at 2:10 PM