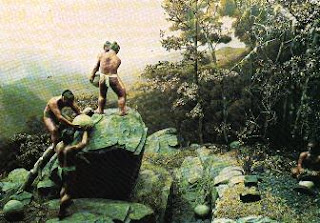 I've always liked the term "cultural institutions" as a collective name for public museums and art galleries. It's got just a smack of the mad-house about it, as if museums and galleries might be sites for the public display of eccentricity, engagingly obsessive behaviours, and the exercise of immoderate personalities ... behind the scenes, as well as front-of-house.

We don't hear the term so often these days (now it's usually the bland "organisations" or the more militaristic "cultural sector"). And neither do we see much engaging eccentricity left in the game. It's all got pretty earnest and bland over the past decade or so. I'm thinking of, for example, of the years when the then director of the Rotorua Museum of Art and History (then much more appealingly known as The Bathhouse) would handwrite crazy labels and pop them in the cases as surprises for his audience. Or the time the next Bathhouse director, the wonderful John Perry, appeared at an art opening in Wellington dressed as a geisha with a chinese "coolie" style hat worn low on his head. Not to mention the common sporting of cravats, bow-ties and Van Dyke beards by art gallery directors. You get the idea.

Of course there are pockets of rampant eccentricity still around if you know where to look. The "vegetable sheep" at Canterbury Museum is always worth a visit, as is the husky dog in the Antarctic section which the taxidermist has mounted on its hind legs, oddly licking the explorer mannekin somewhere around the left nipple. There's the bird with the spoon in its beak in the bird halls at Te Papa, the last visible vestige of the brilliant Victorian natural history case which used to be on display at Buckle Street, where the taxidermist had positioned the birds as if in conversation with one another.

The excellent Tawhiti Museum in South Taranaki is a complete riot, stuffed full of strange historic artefacts and worthy of a lengthy post in its own right; suffice it to say that the owner, Nigel Ogle, spends his time making large-scale dioramas and small-scale models of early life in Taranaki, with the very expressive figurines cast from his family, friends, and local people. Every display case is somehow a paean to Ronnie van Hout ... with a bit of Jake and Dinos Chapman thrown in. Possibly. 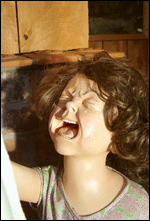 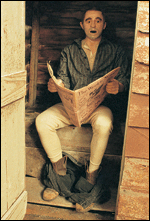 Also in Taranaki (something in the mountain water perhaps?) is the extraordinary Elvis Presley Memorial Record Room, a shrine to the King erected by Hawera painter and decorator K.D. Wasley, which is open to the public by appointment, attracts musicians from all over the world, and is one of the best museum experiences I've ever had -- anywhere. The collection, and its "more is more" display aesthetic, is the unadulterated product of one person's single-minded vision. In addition to more than 5000 picture sleeve LPs and singles displayed on the walls of his converted garage, Kevin's website lists some of the memorabilia he holds:

"an Elvis guitar badge previously owned by Elvis's Uncle Vester Presley, a personally signed copy of Harold Lloyd's (Elvis's 1st cousin) The Graceland Gates, and a scarf from a 1974 performance in Memphis." 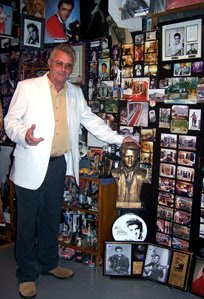 K.D. Wasley in his museum

You get the point: without arguing it at length, a major casualty of the professionalisation of the museum sector in the 1990s has been the unique quirk factor of museums, now largely retired in favour of a slickish "visitor experience" conceived by educators and fabricated out of MDF and vinyl cut lettering. Museums used to provide you with special, strange, sometimes baffling, intensely personal encounters with the past's material evidence, experiences you simply couldn't get anywhere else; now the museum's mission is more about social engineering, in the form of promoting multi-culturalism, environmental awareness, national identity, etc. Nothing wrong with that, I guess; except that along the way, the personality's largely been sucked out of New Zealand's museums.

Exceptions are privately-run collections or those few public museums like Canterbury which have preserved remnants of their own history, from a time when directors and curators were assumed -- if not actively required -- to have large, exuberant, occasionally eccentric personalities, and to apply these to their work. The same is true for art galleries, though due to different conventions of display their personalities have been largely reflected in their collections; viz the amazing collection of American photography which Luit Bieringa assembled during his tenure at the National Art Gallery, or the outsider art which John Perry collected for Rotorua.

I've been prompted to think about this in part by Overthenet's recent post about deaccessioning. It seems that due to recent high sale prices, Te Papa's Goncharova paintings are now worth enormous amounts of money; Overthenet poses the entirely legit question that given the works hardly ever come out of storage, should they be sold and the money used to buy something else? For many reasons, both logistical and philosophical, I'd answer a resounding no! they should jolly well show the works more often instead. But as Overthenet comment, it's good to have the debate.

Sure, such pricey international works are an anomaly in the national collection; but it's quirks and anomalies that give both individuals and institutions their personalities, that stop the creeping tide of homogeneity that's all but engulfed our provincial museums to the point where Te Papa might as well sell franchises. If it were up to me, I'd argue for more risk-taking and individual authorship, in the forming of collections and the politics of programming, curatorship and display; the museum (or gallery) positioned less as an agent of social consensus and more a place for individual enquiry into something extraordinary -- the vision of others. A cabinet for, of, and by, the curious.

As art historian Donald Preziosi wrote recently: "Isn't the ideological project, which naturalises the idea that the museum is the 'practice' of a certain theory or philosophy, the problem in the first place?"
Posted by Cheryl Bernstein at 9:21 AM

You can add GLAMs (Galleries, Libraries, Archives and Museums) to the list of collective nouns - it's getting a workout in policy docs these days.

On the topic of Taranaki brilliance: Fred's Place in Ngaere (now sadly defunct) touted itself as a junk shop but all the good stuff was resolutely not for sale, and displayed inside chickenwire cages. Again, we thought of Ronnie when we visited; it was the huge red and white Milk Bar sign it in one of the cages that brought him to mind.

Fred's Place sounds excellent -- I'm sorry I missed it! What IS it about Taranaki?

One of the exceptions to this institutional blanding out is the museum that centres around its founder/s and consequently becomes a museum of itself. My favourite for its sheer weirdness is Quex House, near Birchington in Kent. It is Major Powell-Cotton's collection of stuffed animals, weapons and much else. Cotton, who died around 1939 virtually invented the diorama used by museums of natural history for many years and the ones at Quex are totally over the top. Pride of place would have to go to the model of Cotton himself with a mirror behind to show th claw marks left by an attacking beast (beaten away by his native bearers). I took an Australian professor who had just arrived from Tokyo there for its sheer strangeness.

In the mood of things 'institutional, I have a section in my travel guide (Frommers New Zealand) called Museum Mania - in the Wairarapa section. Like Taranaki, it has a great range of small, quirky, disparate museums - most, for some reason focussing on the pioneer lifestyle. Maybe they still feel like pioneers in the Wairarapa, though judging by the number of capuucinos and lattes I saw being swigged last time I was there, that's hardly the case. One of the best museums I've discovered lately is Okains Bay Museum on Banks Peninsular. I find something refreshingly cluttered and unco-ordinated - dare I say manic - about small private museums. The big, the slick, the institutional have their place but give me madness and mayhem any day.