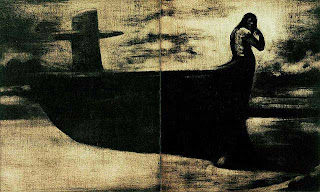 Jason Greig, Viking U-Boat, etching, 1993: the only New Zealand work of art on a Viking theme ever to be shown in a public art gallery.*

The main streets of provincial New Zealand are studded with good intentions. Some of them are forty foot high, made of concrete, and shaped like a carrot. It is no coincidence that as various governments of the day pulled the infrastructure out of the regions, shutting down Post Offices, hospitals, and schools, the citizens of small town New Zealand, concerned both to attract tourists to their locales and to persuade the remaining inhabitants that life was good, fund-raised to erect ridiculous attention-seeking monuments -- making an emphatic statement of the local among what architect Robert Venturi has termed the "persuasive heraldry" of the road side.

Now tempers are flaring over the design for the latest 'big icon', the Dannevirke Viking, set to join the Ohakune Carrot, the Paeroa L&P bottle, the Taihape Gumboot, the Tirau Sheepdog, the Rakaia Salmon, the Big Slice of Kiwifruit at Te Puke, etc. etc. in the pantheon of gigantic provincial New Zealand public sculptures. The resource consent has now come through for the 10-metre figure, but there has been a great deal of argument and some painful compromises along the way: the sword of the original design has now been swapped for a "less bloodthirsty" axe.

But the main problem for the good people of Dannevirke (a truckstop in the Manawatu settled by a handful of Danes and Norwegians in the 1870s) is the horns on the helmet: apparently serious Viking scholars have long since put to bed this tiresome myth, which interestingly, was first promulgated by a visual artist. Viking helmets were definitely worn sans horns, and it would be "painful" to see them pictured otherwise, said Norwegian immigrant Johan Bonnevie when interviewed by Mervyn Dykes of the Manawatu Standard.

At primary school in England during the mid-1970s, we "did" the Vikings. The mental picture I have carried with me is of snarling ginger-headed hordes roaring down the country from Scotland, swinging double-headed axes in pursuit of rape, pillage, and general menace of the poor old lily-livered Anglos, before they rowed off back to Scandinavia in their funny long boats, stolen gold coins spilling over the gunwales. And yes, they wore the double-horned helmet. I rather think it is this idea of the Vikings that the more sensitive elements among the citizenry of Dannevirke are keen to avoid.

Wellington-based sculptor Dennis Hall, who sounds rather grumpy at all the criticisms levelled at the sculpture, says that his gigantic Viking is not intended to be a historical study.

"Ask most people to draw a Viking and they will come up with someone in a horned helmet. What I am giving them is a movie version of a Viking."

Obviously not too precious about his work, which he's constructing in collaboration with Wellington's Weta Workshop, Hall says it's meant to be a "common stereotype", which he clarifies as "a cross between a piece of art and a piece of advertising". (He is also responsible for the much-photographed gargantuan Te Kuiti shearer.) The inside of the work will be left hollow, so that maintenance can be carried out from within. "It will last for thousands of years," threatens Hall.

I started writing this piece thinking that I might draw some kind of parallel between the Dannevirke Viking and the Tilted Arc controversy, but although it's possible, I actually don't think I can bring myself to. I think the art story is instead in the statement by the chairperson of the Dannevirke Promotion and Development Society Inc, Malcolm Peffers, that "the Viking Icon is NOT a statue; An icon is an image - a branding - a trademark - which is NOT necessarily historically correct."

Although, if I understand Peffers correctly, it's intended to be seen less as a work of art and more of an advertisement for the town, I'd suggest the reason that Dannevirke's Viking has caused so much local controversy is that it encroaches on the conceptual -- perhaps the emotional -- territory of public sculpture. Rather than advertising what the place is all about today -- Te Puke earning its revenue from offshore sales of kiwifruit, for example, or Ohakune growing whopper carrots or Tirau hawking sheepskin slippers -- the big cartoony Viking on the roundabout interprets Dannevirke's past, drawing on the cultural memory of the place rather than representing its current economic identity. As such, its inhabitants, including the descendants of the original Scandinavian settlers and local Maori, will necessarily have a point of view about the way their history is memorialized.

Peffer notes that still unbuilt, the Viking non-statue has already "given Dannevirke the best publicity that it has ever had". But the promotions group have agreed that the slogan which was originally to accompany the figure, "Take a liking to a Viking," must go.