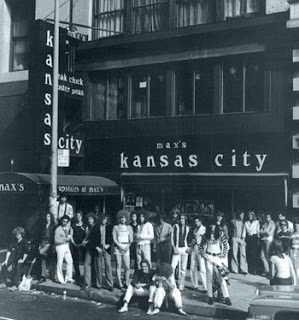 Charles Giuliano, Maverick Arts blogger, isn't impressed with the way the art world has burgeoned in recent years beyond all comprehension. It seems that any parvenu can now be a player:

"A decade or more ago when it came to art the super rich had no taste. But now their kids have gone to art school or earned degrees in arts administration. In the past bored socialites became interior decorators but now they are private dealers or art consultants."

Giuliano reminisces about a simpler (yet somehow more glamorous) time when the weekly list of dealer gallery openings in New York City was brief enough to be published in the Sunday paper. Back in the day, the New York art scene was a community:

"On any given evening you could see most of the "serious" New York artists at Max's Kansas City. During Happy Hour Mickey Ruskin would put out the free chicken wings. That, and a seventy five cent glass of wine, made an evening meal. If you hung around long enough you got to enjoy the midnight parade of Andy's factory gang into the back room under Dan Flavin's light sculpture."

Giuliano suggests that there may be up to 100,000 artists resident in the NY area today, although only a fraction of them can now afford to live in Manhattan. He blames the rampant growth of the artworld on two main factors: firstly "the unquenchable hunger [of] the rich to fill their luxury condos, villas, and warehouses with art"; and secondly the "cranking out" of studio degrees by colleges and universities. "Bottom line, there are just too many artists".

Although our domestic art market could probably do with an injection of super-rich (though tasteless) collectors, there's a similar issue of artist oversupply in New Zealand. I feel for all those public gallery curators and art dealers confronted by yet another hopeful just out of art school popping their head round the door and sheepishly clutching a CD of their work, desperately angling for a studio visit. (Of course I also feel deeply sorry for all the hopeful, but ultimately sadly disillusioned, fledgling artists.)

Amazingly, there are now a whopping 22 New Zealand tertiary organisations accredited to dispense fine arts qualifications, many of them at a degree level. There must be literally hundreds of artists graduating every year from organisations as diverse as the University of Auckland and the Hungry Creek School of Art and Craft, not insignificant in a country of New Zealand's puny size. The percentage of graduates who actually pick up a good dealer, or ever show in a public gallery, or an artists' run space, or for that matter manage to even sell their work in a cafe, must be absolutely miniscule.

And most of the graduates will carry significant debt as a result of their studies, but will be unable to use their "qualification" to make any money to repay their student loan. The irony in all this is that's still the fine arts graduates of the "proper" universities (Auckland, Canterbury, at a squeak Massey) who are most likely to be able make a viable career as artists, although universities are traditionally places to learn rather than to train. On the other hand, fine arts graduates of what used to be the polytechnics (which once ran entirely industry-orientated vocational courses) are much less likely to show in the big public galleries or with the major dealers, and hence to come to the attention of the big collectors. (The only real exception to this extremely snobbish -- but pretty accurate -- rule of academic thumb is AUT, which is producing some significant players in the New Zealand art scene, largely due to its faculty of practising artists of the calibre of Stella Brennan, Liyen Chong, Paul Cullen, Saskia Leek, Fiona Amundsen etc.)

The relatively recent expansion of the NZ art world is a great thing for its most prominent artists (the ones Hamish Keith reckons will benefit almost solely from the Labour Government's resale royalties programme), as it has increased demand for their works to a point where you no longer need to be dead to make a decent living. But for every market success story, there must be 50 would-be artists pumping coffee or waiting tables -- and at the rate our tertiary institutions are churning them out, that number's only going to increase.
Posted by Cheryl Bernstein at 4:27 PM