Spoils to the victors 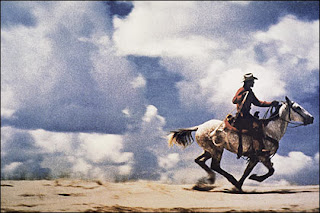 Described in a recent interview by British novelist and frequent visitor to New Zealand Hari Kunzru as one of the "victors of the art boom" (a phrase I'm still mulling over), American artist Richard Prince has been spending up large recently. His works have been fetching big prices: a couple of years ago, a cowboy image by Prince became the first art photo to sell for over a million dollars US, a figure quickly surpassed by another of his iconic re-photographed Marlboro Men images, which sold for US$3.4m in January this year.

No stranger to the big bucks himself, Kunzru, who secured an advance of 1.25 million pounds for his first novel, The Impressionist, comments that Prince now has the financial muscle to compete with libraries and institutions to fuel the acquisition of another of his passions -- rare 20th century books. Prince's book collection, which now fills a two-storey building he owns in upstate New York, begins in 1949, the year of his birth, and ends with books published no later than 1984.

"Nabokov's desk copy of the Olympia Press first edition of Lolita, heavily corrected and annotated; a letter written by Sylvia Plath the day before she killed herself; the only known copy of Dashiell Hammett's The Glass Key to retain its original dust cover ($175,000 to you, sir); Jimi Hendrix's letters to his dad; Neal Cassady's copy of On the Road; Kerouac's previously unknown original scroll manuscript of Big Sur (twice as long as the published book); the manuscript of The Godfather as well as the letter in which the editor suggested changing the title from The Mafia to The Godfather; and letters by Thomas Pynchon written in the late sixties, while he was at work on Gravity's Rainbow."

Most artists I know -- the ones dealing with images anyway, the abstract ones tend to be a bit more Zen and minimal in their personal habits -- are, like Richard Prince, voracious collectors. They collect old New Zealand books, kitsch examples of Maoriana, taxidermied animals, images clipped from newspapers and magazines, and other artists' works. In one sense, their collections provide source material for the artist's own works: in another, both the works and the collections speak to our society's compulsion to accumulate objects and images as part of the construction of our personal identities. Or something like that.

In other recent news about art collectors, it seems there's been a run on the Sunco brand inflatable lobsters which Jeff Koons has used as an inspiration for monumental sculptures. Works like Koons's Bike Rack (2004) have created a "halo effect", vastly increasing the value of the original swimming pool inflatable, which until recently has retailed for a mere US$14.99. The five-foot-high toy lobsters have sold out in the stores, bought up by canny speculators including the Museum of Contemporary Art in Chicago; one sold recently on eBay for US$736.58. 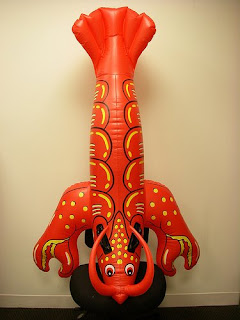 "It's like one of Koons's sculptures, but you don't have to pay $5 million for it," said the happy seller, clutching his copy of The Complete Works of Walter Benjamin.
Posted by Cheryl Bernstein at 12:53 PM