What they don't want you to know 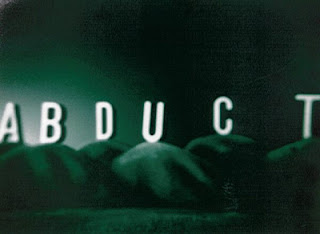 
Regular readers of Art, Life, TV, Etc. will know that I have somewhat of a bee in my bonnet about museums that are keener on interpretation and interactivity than in just getting on and showing the good stuff. Yet somehow I am filled with admiration for the sheer outrageousness of a museum which appears to collect no genuine stuff at all, and yet still attracts close to 150 000 visitors per year: the International UFO Museum and Research Center, in Roswell, New Mexico, for which a new building is being designed by architects Ahearn-Schopfer Associates, of Boston, featuring an extremely high-camp exterior "wormhole". The concept drawings have just been released. “The concept is that this is a found object emerging from a file cabinet, kind of like information hidden in a drawer somewhere,” explains the architect, referring to the purported government cover-up of extraterrestrial evidence -- the "Roswell Incident" of July 1947, in which either a weather balloon fell to earth, or a group of tiny alien men crash-landed in a flying saucer, depending on your point of view. It's a story that refuses to die, and the UFO Museum is increasingly driving both tourism and progress to the one-horse desert town:

"Prior to the [opening of the] UFO Museum, there were no alien eyes on the lampposts, no space ship logos for a local car dealer, no city of Roswell logo and branding campaign including a space ship, no documentaries on the Incident and no television programs with the Roswell name. In the past eight years, six UFO related businesses have opened in downtown have opened. There have been six hotels completed and one currently under construction. Roswell now has a Home Depot Building Center, Super Wal-Mart, Hobby Lobby, Sam’s Club, PetCo, Famous Footwear and others."

The thing is, from what I can work out, the Museum doesn't have any actual stuff in its collections (I guess all the authentic alien artefacts would be stored in a top-secret government facility somewhere?), so instead it exhibits (currently on pegboard walls; that'll change when the new building goes up) copies of newspaper accounts and affadavits sworn by witnesses to the alien landing and subsequent cover-up, as well as a large model of a flying saucer and interpretive displays such as the very popular "Alien Autopsy" diorama below. 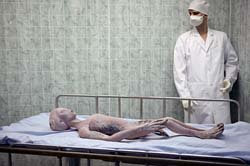 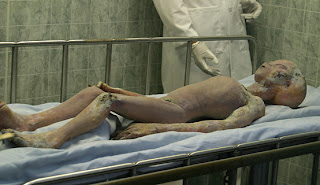 The Roswell UFO Museum's website comments that it "maintains its position as the serious side of the UFO visitors to Roswell and the surrounding areas ... people come looking for answers to specific and personal questions about UFOs or simply out of curiosity. People spend from 30 minutes to a week here."

And somehow, it all kind of works: a museum to something that probably never happened filled with inauthentic objects that people made years later. Usually I loathe museums that see their business as telling stories, but on reflection, maybe it's all about the nature of the story they have to tell.

Posted by Cheryl Bernstein at 9:13 AM