Waiting for the tall dark stranger 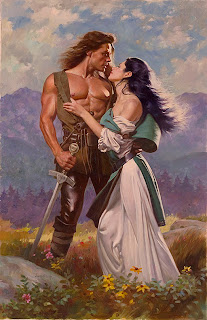 Max Ginsburg, cover art for The Lady in Winter.
"...Put that sword away if you're not going to use it."

New Zealanders are not a romantic people. Put it down to our dour Presbyterian heritage, perhaps: but public displays of emotion make us distinctly uneasy, while grand gestures of love are likely to prompt only cynical remarks. Colin McCahon knew it, famously lamenting the lack of lovers in our landscape; in his curmudgeonly rant against 70s society, The Passionless People, broadcaster Gordon McLauchlan bemoaned our inability to relate warmly to one another. And I would doubt much has changed since. Consequently, where New Zealand artists examine the subject of romance, it tends to be along the lines of love-gone-wrong.

Here for example is Seraphine Pick's Untitled (Yeti II) from 2006. 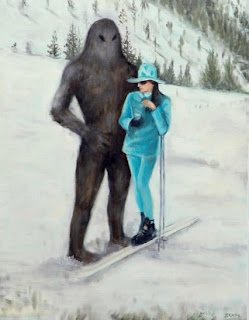 And another untitled work on paper by Pick from 1997. 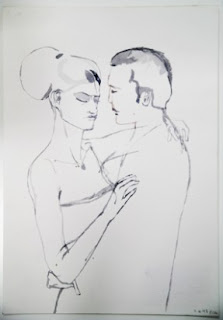 And Yvonne Todd's Simone Hartley, LED print. (In fact almost anything at all by Yvonne Todd.) 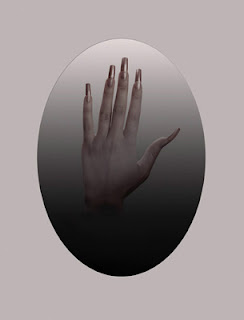 Yet New Zealand has produced a disproportionately high number of the world's most successful romance writers, and we're massive consumers of Mills and Boon romance books. It's a guilty secret of a surprising number of people, including at least one public gallery director of my acquaintance. 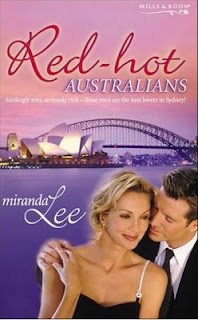 A book looking at 100 years of Harlequin Mills & Boon book covers is just out: Joanna Bowring and Margaret O'Brien's The Art of Romance traces the changing aesthetics of female fantasy, from the square-jawed heros of the 1920s through to the new men of the 1980s and 1990s, by way of World War II heroes and 1960s Dr. Kildare lookalikes. Featuring titles such as Romance Goes Tenting, Egyptian Honeymoon, and Beware the Beast, The Art of Romance reveals the way in which Mills & Boon books both reflect social history and play a part in it: did you know, for example, that the women of West Germany distributed 750 000 romance novels to their sisters in the East when the wall came down? No, neither did I.

From my own limited excursions into the genre, it seems that while you can readily read about extra-terrestrial love affairs, as well as romantic adventures with spies, spooks, doctors, and the extraordinarily popular subset of "sheikhs", romance novels which feature art plots are few and far between.

Here's a few uncovered by my researches.

ise Allen's A Model Debutante poses moral, as well as practical, problems: "Modelling nude for an artist might earn her keep, but when Tallie comes into an inheritance and takes her place in Society her secret would ruin her. She finds herself constantly in the company of Lord Arndale - suspicious of Tallie's past he still captures her heart. But dare she trust him?" (I suggest not.) 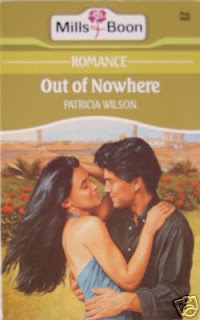 The fierce-but-brilliant-doctor meets shy-but-beautiful nurse plot is given the art treatment by Patricia Wilson in Out of Nowhere: "She wasn’t welcome! Emma Shaw had escaped an uncomfortable situation by fleeing to Credlestone Hall, her uncle's isolated home in Dartmoor. But when she arrived late one foggy night, her uncle wasn't there. Another man was. A man named Jake Garrani. Jake, it turned out, was a friend of her uncle's and a well-known artist. He was living at the house because he needed a quiet place to work, and he didn't want Emma "hanging around", disrupting his concentration. If she stayed, she'd have to pose for him... It was the last thing the shy and emotionally battered Emma wanted to do. But she refused to be scared off by this ... this tyrant. And she refused to give in to the attraction that sprang up between them. An unwanted attraction -- no matter how exciting, how compelling, it might feel!" 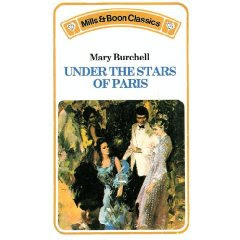 Mary Burchell's Under the Stars of Paris doesn't quite count, as the hero is a designer. But nonetheless the plot (as recounted by Avid Reader) could translate readily to other art genres: "Anthea is persuaded to step in and model a dress as an emergency. She soon finds herself working for the great designer the remarkable Florian a very dificult and demanding artist. Anthea copes well and soon finds herself falling under his spell." 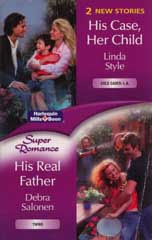 At one end of the romance spectrum is the sports hero; at the other end the artist, muses Debra Salonen in the up-to-the-minute His Real Father. But whatever you do, don't get them mixed up. "No one ever confused the Kelly brothers, especially Lisa Malden. Even if they hadn't been fraternal twins, there wouldn't have been a problem. They were nothing like each other. Joe was quiet, and Patrick the life of the party. The jock and the artist. Both deserved to be loved. Each was important to Lisa. But only one was the father of her son!"

And in quite possibly the classic of the genre, Valerie Parv's The Love Artist: "She would never repeat her mother's mistake. Her mother's life had been ruined by the irresponsible actions of her artist husband. Now Carrie faced a double threat--the desire of her sister, Krys, to follow in their father's footsteps, and her own growing attraction to Roger Turkan, globe-trotting cartoonist. Roger was handsome, talented and adventurous, but he lived from hand-to-mouth. He didn't even have a home of his own. How could he give Carrie the love and security she so desperately needed?"