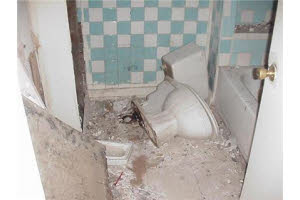 I am a nosy beggar, as well as a bit of a cheapskate, so when the latest editions of Urbis or NZ Home or NZ House and Garden are out, I pop into our local newsagent to have a quick read. I scan the contents page to see if I vaguely know anyone featured (tragic behaviour, I'm well aware), and then I flick through the magazine to have a quick shufti at the art.

Following this highly scientific research methodology, I've identified four kinds of art collection featured in lifestyle magazines. There's the "decor collection", which features coloured rectangles chosen by interior designers from affordable art shows and the kind of galleries which, as John Hurrell says, also specialise in framing; these works look like art, but aren't at all. Then there's the "generic Auckland collection", which includes a work on paper by Gretchen Albrecht, a small Bambury and perhaps a Gimblett, with a bronze by Paul Dibble or Terry Stringer on the window sill.

There's a figurative variant found throughout the country which includes a Fomison painting, probably a Frizzell or two, maybe a Richard McWhannell; possibly also, depending on the age of the collector, either a Shane Cotton and a Tony de Lautour or a Maddox and a Clairmont. (In last month's NZ House and Garden I admired Hamish Keith and Ngila Dickson's Fomison and Frizzell paintings, as well as their extensive collection of art cushions.) Finally there's the sort of top-end collection that includes a free-standing figure by Ronnie van Hout, a bulbous excrescence of paint by Rohan Weallans, and an installation by et al featuring tape hiss and a tangle of speaker wire. 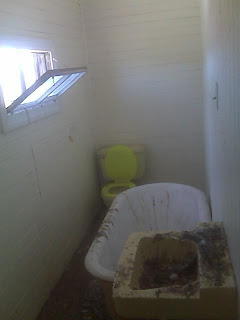 I've had several friends and acquaintances over the years who've had their homes "done" by design magazines. As a consequence, I know that houses featured in design mags are to real life as the catwalk is to gardening clobber. I have stored dodgy furniture and cardboard boxes full of crap and knicknacks for a neighbour who was going for an uncharacteristically minimal look in her spread; I also helped her move in the flash new furniture she had borrowed for the occasion. Her place was unrecogisable when the the magazine came out. Other friends have appeared to entirely lose the enormous TV that habitually dominates their lounge, or to have acquired several tasteful pieces of Scandinavian furniture immediately prior to the shoot.

It's similar, I suppose, to the kind of massive clear-out and smarten-up that you do when you put your house on the market. (We rented -- and entirely filled -- a storage unit with objects removed from our last house in order to sell it.) Oh yes, I always live with all surfaces completely bare of objects and an enormous vase of tulips in the kitchen... it's gracious living all day everyday round at our house. 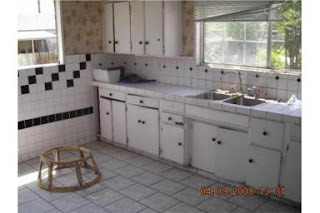 For the nosy beggar, real estate listings can also provide a means of checking out other people's art collections, though you're more likely to see a faded print of The Haywain than a previously unexhibited Donald Judd. Real estate listings also supply another extremely guilty pleasure likewise provided by interior design mags: the opportunity to marvel at the extreme foulness of other people's taste.

Imagine, then, my great joy at coming across It's Lovely! I'll Take It!, a blog which deals solely with unfortunate real estate photographs. (The photos above are borrowed from it. Rather than being taken at my house, in case you were wondering.) Not much art hanging on the walls at It's Lovely!, but in a way, each image is a work of art in its own right. Great stuff.


*I got to It's Lovely! I'll Take It!, courtesy of Christchurch journalist and photographer Adrienne Rewi. It's one of her favourites, too.
Posted by Cheryl Bernstein at 12:21 PM

This made me laugh so much after just having a routine rental inspection today. Owner's comment "its hard to beleive you have three small children - its so tidy and clean" - oh yeah its like this ALL the time :-) I did have a big vase of daffodils out but had put away the scary Clairmonts (prints)