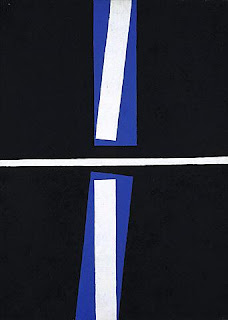 Following a trip to Europe where he researched contemporary abstraction, Gordon Walters produced more than 200 works between 1953 and 1956. Yet with only a couple of exceptions, he waited until 1974 to exhibit them publicly. On the occasion of his show at the Peter McLeavey Gallery in October 1974, Walters commented:

"They were not shown at the time I did them because I considered the artistic climate to be unsympathetic, if not downright hostile, to abstraction. Some of the themes still interest me and I frequently take up and rework ideas which were not fully realised at the time."

Something that's always interested me about these works are their similarity to the visual perception exercises used by psychologists and neurologists. Academic psychologist Arthur Schapiro has a great website, Illusion Sciences, in which he discusses the mechanics of the visual illusions he creates to study visual perception. Several recall Walters's compositions. Strikes me I'd like to read a really good essay looking at Walters's work from this perspective.
Posted by Cheryl Bernstein at 1:08 PM