Who do you think you are kidding Mr Hitler? 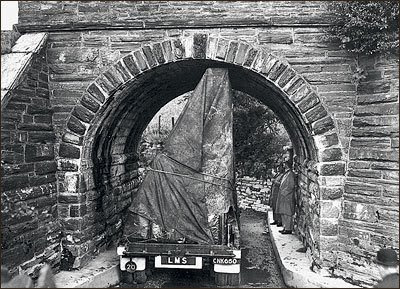 The day before Britain declared war on Germany, the last shipment of treasures from the National Gallery left London secretly for Wales. More than 1800 paintings were evacuated in just 11 days: the image above shows the enormous Equestrian Portrait of Charles I by Van Dyck being manoeuvred under a low railway bridge. (In the final instance the truck's tyres were deflated to let it through.)

Initially the paintings were placed in stately homes which had been quietly scoped out by the Gallery's Assistant Keeper during the Munich Crisis of September 1938. He made extensive notes on his findings: "The owner is nice, ruled by his wife, a tartar, anxious to have NG pictures instead of refugees or worse," and, "Owner not inspected but seems obliging in a haughty way."

Conditions in the paintings' temporary accommodations were not always ideal: Susanne Bosman, whose book about how the British National Gallery weathered World War II has just been published, notes:

At Crosswood, where 70 paintings were stored, the hot-water pipes of the antiquated heating system ran under the floor of the library, where the pictures were kept, seriously lowering the relative humidity, with potentially disastrous consequences for paintings on panel and canvas. As the heating could not be turned off without affecting the rest of the house, blankets and felt had to be soaked in a nearby stream and hung in the library until the humidity reached acceptable levels.

By May 1940, as hostilities escalated, a plan was devised to send the works to Canada for safe-keeping. Winston Churchill refused, however, to let them leave the country: National Gallery Director Kenneth Clark wrote that the PM's actual words had been "Hide them in caves and cellars, but not one picture shall leave this island." The collection was instead transferred to Manod Quarry, a slate mine in the Welsh mountains, beneath 200 feet of solid rock. Free-standing brick buildings were constructed in the massive chambers of the mine to protect the paintings from slate dust, and a narrow gauge railway was laid to transport them between buildings.

Hit several times by bombs during the Blitz, the Gallery itself remained open throughout the War in order to keep up the morale of Londoners. In 1941 the sculptor Charles Wheeler wrote to the Times, expressing a wish to see Rembrandt's Portrait of Margaretha de Geer which had just been acquired by the National Gallery. Kenneth Clark immediately brought it back from the quarry in Wales and put it on display, instigating the "Picture of the Month" scheme, in which a single painting was removed from Manod and exhibited to the general public in the National Gallery each month.

We don't have a history written of New Zealand's galleries and museums during war-time: we should. 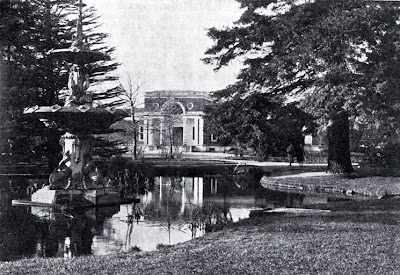 A view of the lily pond and Peacock Fountain with the McDougall Art Gallery in the background, Botanic Gardens, Christchurch, 1935. From the Christchurch City Libraries website.
Posted by Cheryl Bernstein at 12:56 PM