"Something rather low and anthropomorphising" 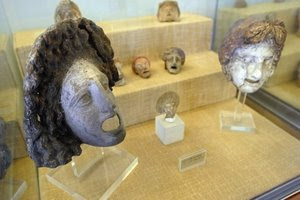 A new series of articles on museums has been commissioned by the excellent Intelligent Life magazine. First up is novelist Julian Barnes, on the Museo Mandralisca in Cefalu, Sicily, whose collections were put together by Enrico Piraino, Baron of Mandralisca (1809-64).

The Museum, says Barnes, is rather run-down, has a fierce guard, and is a bit boring:

"There is a line-up of those earthenware oil lamps, so necessary in the Ancient World, whose subtle differences are nowadays lost on amateur observers. There are 19th-century Cefalu cabinets with naively naughty painted glass panels of loafing, half-clad gods and goddesses. There are a number of rather ordinary pictures. And there is a whole roomful of stuffed animals and birds, many of them long hunted to death on this island. At least, you occasionally find yourself reflecting, the baron didn't collect stone arrowheads." 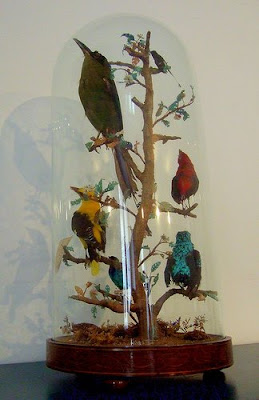 While his primary interest is the two surprising masterpieces owned by the Museum (a fourth-century Greek crater vase painted with a scene at a fishmonger's, and Antonello da Messina's smug-looking Portrait of an Unknown Man, found by the Baron mounted on a pharmacist's cupboard in Lipari), there are oddments among the "omnivorous" collections which, for Barnes (and by the sound of it for me too), rise above the ordinary:

"You might think, for instance, that the stuffed-animal room, in which dozens of less than sprightly looking specimens are displayed against fading painted backdrops, might be a bit of a downer. It is, until you spot three animals which for some reason are not confined behind glass, but casually placed on top of the cabinets: a hedgehog and a pair of porcupines (pictured). The latter are lined up nose to nose, as if in friendship or confrontation (who can tell with a porcupine, especially when stuffed?). 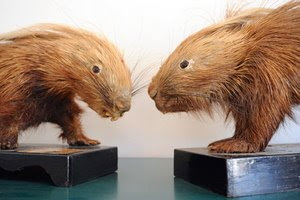 "Their natural sleekness is enhanced by a doubtless inauthentic glaze which has been applied to their prickliness, and there is something about them--no doubt something rather low and anthropomorphising--which inevitably puts a goofy smile on your face. In the same way, the monotony of massed seashells on display will be suddenly broken by examples of such an eerie elegance that they seem the result of modern high-tech design."

I love that Julian Barnes would write in praise of two badly-stuffed 19th century porcupines. Such encounters with strange and ambiguous objects that spark the imagination and curiosity are exactly what the best museums are all about.
Posted by Cheryl Bernstein at 1:14 PM

Email ThisBlogThis!Share to TwitterShare to FacebookShare to Pinterest
Labels: museums

"Such encounters with strange and ambiguous objects that spark the imagination and curiosity are exactly what the best museums are all about".

- I absolutely agree! Sometime this week, I am taking myself back to visit the Auckland War Memorial Museum - http://www.aucklandmuseum.com/

Auckland's museum is quite charming. It has a superb collection of Pacific and Maori artefacts housed in a stately building in a colonial style I have seen elsewhere, in places as far off as Calcutta.

Small museums like this could never compare in scope or architecture or collection/s to the British Museum say. But its charm lies in what it does with its distinctive heritage and collections, in presenting all this in a comforting dim lighting conducive to mysterious encounters...

The National Museum of NZ - Te Papa Tongarewa - on the other hand seems to do all it can to destroy the possibilities for mysterious encounters through an over-the-top (OTT) exhibition style and architecture.