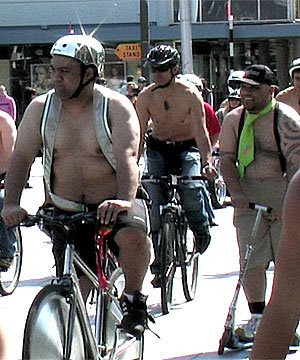 It's really hard to get contemporary art in the mainstream news media. Unless, of course, it cost a lot of money; is potentially blasphemous; or is made of tiny squares of burnt toast. (Any artist who can hit the trifecta with a single work is assured of top spot on the six o'clock network news in New Zealand.)

But sometimes contemporary art just sneaks into the news without anyone noticing, much. Vis, the "Moobs on Bikes" parade in Christchurch on Friday, a battalion of topless men on two-wheeled transport raising money for breast cancer in a parody of the infamous annual "Boobs on Bikes" parade down Auckland's Queen Street. (Yes, "Moobs" is unfortunately a contraction of "man boobs". It's all class down here in the South, too.)

The gent at the head of the parade in the photo above (from stuff.co.nz) is riding one of Belgian artist Ann Veronica Janssens's Les Australoïdes cycles, which he enterprisingly borrowed from the Christchurch Art Gallery for the spectacle. The distinctive silver bikes are one of the strongest works in the current Scape biennial of public art, "playing", as the Scape site has it, "on the effects of light and movement to create poetic experiences for viewers." Cough cough.

This sort of functional art work co-opts the rituals and practices of everyday life, in order to suggest new ways of looking at social space. I don't know really why I should have found it so enormously satisfying to be watching at the moment when everyday life co-opted the art right back. But then again, maybe that's one of the possible measures of the success of Janssens's work.
Posted by Cheryl Bernstein at 9:24 PM