Smoke 'em if you've got 'em

Before the Marlboro Man, there was the Marlboro Baby, one of a historical series of hucksterish adverts extolling the great benefits of smoking, which are currently on show at the New York Public Library. Fans of the great Mad Men TV series about the goings-on in a Madison Avenue ad agency in 1960, which recently screened on Prime in New Zealand (Sunday nights are just not the same without it; fingers crossed they buy the second series) will appreciate the full grandeur of the big, expensive lies being told in these images.

Falling into the so-appalling-its-funny category, the posters include images of dentists and doctors promoting Lucky Strikes and Camels ("20,679 physicians say ‘Luckies are less irritating!’"), as well as movie stars, a vice-presidential candidate and sports heroes shilling for their favourite brands. Even Santa turns out to give Pall Mall a plug. Cough cough. 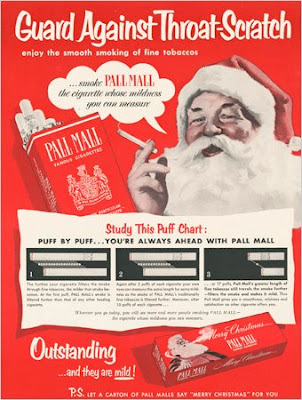 Posted by Cheryl Bernstein at 1:10 PM

Email ThisBlogThis!Share to TwitterShare to FacebookShare to Pinterest
Labels: art and advertising, US TV