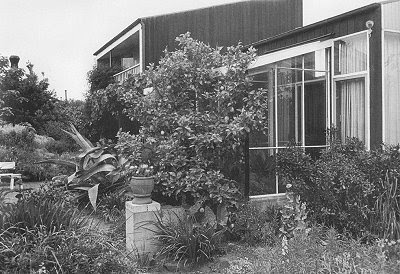 Years ago, I visited the artist Bill Sutton at his house in Richmond, Christchurch. I went to interview him about the Christchurch art scene in the 1960s, in which -- as in several other decades, too -- he was a major figure, variously as a teacher, practitioner, and champion of both the arts and fellow artists.

The house was fantastic: like the man himself, compact, modest, unassuming, well put-together. We sat in the lounge on low modernist chairs with wooden arms, facing a tiny conservatory area festooned with well-tended plants. I remember that after a while Bill brought out tea and biscuits: he turned the plate so that the pink wafer biscuits faced me, and smiled. "Perhaps you might like these," he said.

The photo above shows Bill's house (via the excellent and often enjoyably vituperative Canterbury Heritage site), and gives an idea of the equally significant garden in the modernist style which he designed and planted. The house itself was built in 1961, but I'm not certain of the architect. The 1960s were one of the great decades in Christchurch architecture. The city's best mid-century modernist architect, Paul Pascoe, was still working; while a new generation including Ian Athfield, Miles Warren, Maurice Mahoney, Don Donnithorne and Peter Beaven were beginning to make their marks on the city scape, developing a distinctly modern and brutalist architectural style which at the same time acknowledged the region's vernacular building history, with tall chimneys and sharply pitched roofs.


For fans of modernist architecture, there's a new-ish site devoted to the Christchurch Modern with brief profiles of some of the key architects of the Christchurch Style, as well as contemporary photographs of their domestic work. Highlights so far for me (people are being encouraged to send in images of other houses) include Rita Angus's house on Aranoni Track, Clifton, designed by Paul Pascoe and pictured by Angus above; the prototype "Noddy" houses in Queens Avenue, built by Miles Warren for his parents; and Pascoe's much-loved Piano House in Sumner.

I really hope that the appreciation which people increasingly have for the modernist period of New Zealand's design history results in greater protection for its iconic examples than has been meted out to earlier domestic architecture.
Posted by Cheryl Bernstein at 12:24 PM

It was designed by Tom Taylor. When Bill lived there he had one of Tom's sculptures in the courtyard.

I'm interested to know that; many thanks for the comment. Someone should do a decent exhibition and publication looking at Tom Taylor -- strikes me as being influential in all kinds of ways, as well as a pretty interesting artist in his own right.

After Bill died there was some talk of it being bought by the Christchurch art gallery or city council as an artists residence, rather like the McCahon house in Titirangi. It didn't happen sadly, don't know why, it would have worked really well and I recall the house sold for a very reasonable price. Bill had some great parties there.

Acknowledging important figures in our cultural history by preserving their working environments is something that NZ does very poorly. Collectively we seem to value the real estate far more than the cultural memory of the place. Perhaps the most poignant example of this was when Ronald Hugh Morrieson's house in Hawera was knocked over to make way for a new KFC, which now stands as a cheap 'n' greasy monument to the greatest writer Taranaki's ever produced...