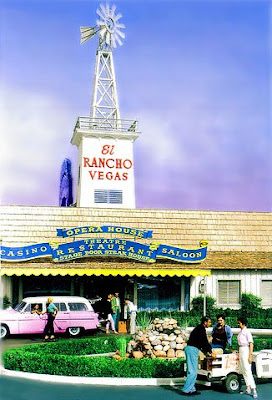 The big guy and I were in Las Vegas a few years ago, indulging our mutual Ratpack obsession by looking for traces of the old Vegas among the tawdry spectacle of the new mega-resorts. In a town that regularly obliterates its own history, dynamiting obsolete hotels and reinventing itself over and over again on the same site, there wasn't much left: the "Welcome to Fabulous Las Vegas Nevada" sign as you approach the strip; the run-down casinos like Binions Horseshoe and the Four Queens downtown, with their feather-bikinied showgirls spruiking for business out the front; the "Elvis slept here" sign outside the decrepit Normandie Motel; a tribute act impersonating the Ratpack.

The first few nights, we stayed at the El Cortez, right on the dark fringes of downtown by the grim concrete block motel compounds and pawn brokers and a 7/11 in which the tension in the air was so palpable you could have cut it with a machete. Our room looked like something out of the second half of Martin Scorsese's Casino, after Sharon Stone cuts her hair: an early 80s symphony of smoked glass and brass bathroom fittings and quilted bronze poly-satin. Downstairs old people dragging oxygen machines behind their motorised wheelchairs played the slots like demons. 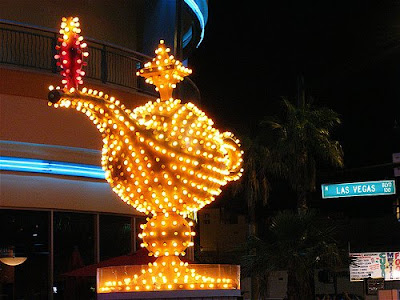 Near the hotel we came across a large and extraordinary object: instantly recognisable as the magic lamp from the old Aladdin, studded with bulbs. Dating from 1966 (a year before Elvis and Priscilla were married at the hotel in a small private ceremony), it had recently been restored and reinstalled on a downtown street. There were more signs from the old days of Vegas being restored, we read, including Vegas Vic and the Silver Slipper; we wondered if The Sands sign was among them; we wondered if it was possible to see them; but then we forgot about it, marking it down later as another reason to go back.

Hearing that Vegas's graveyard of dead signs -- now called the Neon Museum, available to view only by prior appointment -- is the best museum this journalist has ever visited made me rueful that we didn't try harder to get there.

"Cameras immediately came out of pockets as we flocked to the nearest signs in sight: the Aladdin's silver lamp, the atomic letters from the side of The Stardust, the red Golden Nugget sign used in Martin Scorsese's Casino. These are the fallen relics of popular iconography. In the Boneyard, they are made authentic by the rust, scars, and broken light bulbs—the messiness that's absent not only from mainstream visual culture but also from the flawless museum objects of the present. Their histories are explained through the visual details that remain on their surfaces and at our feet in the form of broken glass, rather than in extended wall text and museum jargon." 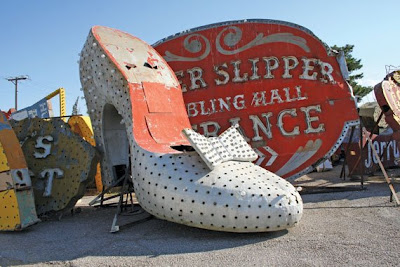 The Boneyard of dead signs is a wunderkammer, or cabinet of curiosities, notes Langner, an open-air museum crammed with bizarre objects but mercifully lacking the explanatory devices of contemporary museology which tell you precisely what you're looking at and in the process, remove your sense of curiosity and wonder. "The overpowering curiosity that comes with entering a space abounding with unlabeled artifacts is a natural inspiration to look closely and to ask questions, two tasks that mainstream museums spend large amounts of time, money, and text trying to encourage in their 21st-century audiences."

The Neon Museum has so far restored ten historic signs and put them back into the public thoroughfare in downtown Vegas, thus turning them into public art works accessible to the community and tourists at no cost. The purpose is to build community, by injecting the artefacts of its own history back into a place with no time for it. Back in 1972, architect Robert Venturi (who coined the saying "Less is a bore" as an antidote to Mies van der Rohe's dictum) shocked the modernists by stating that architecture had a great deal to learn from the commercial landscape of Las Vegas: I think his comments may apply to museums, as well.

Hey, I'd never heard of this one. Very cool and a dead cert for inclusion over here. Cheers!