A chapter of accidents

As I write, the entire family -- absent me -- have been stricken with gastric flu and the house resembles the sun lounge of the Inter Island ferry after a particularly rough crossing. But right now all's quiet; time to sit down in front of Coro Street and blog about some things that have caught my eye over the past few days.

1. Accident Book
Accident-prone British artist Simon Faithfull has produced a book cataloguing the various mishaps which have seen him admitted to 8 Accident and Emergency departments. He's printing 500 copies, which will be tucked among the ratty old magazines at various A&E departments in London and Cambridge, waiting to be discovered 'by accident by people who've had accidents'. Those who fancy it can take Faithfull's book home, and if they're so inclined, they can then use a special code provided to log on to a website, record the location and date of the discovery of the book and detail their reason for their visit to A&E.

I like the sound of this work, very much: I've spent a lot of time waiting at A&Es myself over the years for one reason and another, and the work plays into the essential curiosity you always have about the exact nature of the events that have brought other people to the hospital. I'll keep watching to see what responses Faithfull gets. (I'd imagine the temptation to make some up, though, would be tremendous.)

Simon Faithfull, proposal for a work, 'Teach My Dog to Type (using a specially extended typewriter)'.

Reading about this project reminded me about a very accident-prone museum technician I once worked with. In particular I recall a terrible incident where we were installing a huge steel work. (I say 'we': of course, I was standing well back pretending to direct the traffic while everyone else did the heavy lifting.) The work was finally grunted into place and everyone relaxed. Suddenly there was an loud DDONNNGGGG sound, like a massive gong ringing. One of the steel motifs had become detached from the work and fallen squarely onto the accident-prone technician's head. There was no reason why it should have been him, out of the half dozen people in the room, but somehow it was not unexpected. He was utterly poleaxed. After being assured that he was OK, everyone collapsed in shameful laughter: it had looked like something out of a Looney Tunes cartoon, like the one-ton weight felling the coyote. When he came to, he said brightly, 'Not to worry! I've been concussed 16 times. This will make it 17.'

(Not much chance that I'll be in one of the A&E departments in which Simon Faithfull's accident register will be secreted: but I guess this comprises my response anyway.)


2. My body is my tool
I'm not a fan of street-level performance art. (And actually when I think about it, of much performance art at all, wherever it takes place.) The current push to preserve Marcel Marceau's legacy is not something I would happily contribute to. In fact, the list of public 'creative acts' I would personally be delighted to see a city ordinance against includes:

(Any combination of the above only exponentially increases the offence.) 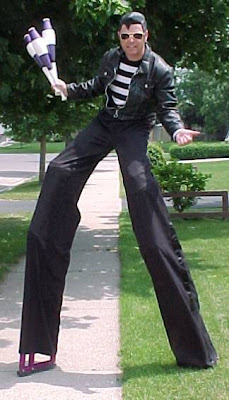 Possibly unwisely, I mentioned some of these shameful prejudices on Twitter the other night. I had several people tweet back in complete agreement (clowns, Christmas music, 'random acts of biblical reading on street corners and anyone playing a small electric piano', as well as face painting, were also suggested as prime offenders. It was also helpfully pointed out to me that as a resident of Christchurch, home of the circus arts school, I could witness public acts of creative heinousness committed daily all over town). But the next morning I was taken aback to read quite a plaintive tweet from someone I didn't know asking why on earth I would wish to ban fire performances and circus arts from public places? This was not something I could readily answer in 140 characters or under.

Which in turn reminded me of something an ex-visual arts manager at NZ's Arts Council (now Creative New Zealand) once admitted to me; he had been badgered by the craft sector* for months, and in the end said with great dignity 'Knitting may well be an art form. But it is not an artform we choose to fund.'

Can't get away with that stuff so much anymore.


3. And finally...
Elder statesman, contrarian and cultural curmudgeon Hamish Keith is now on Twitter. He also has a new blog about the formation of Auckland as a supercity. Which is all very well, and quite interesting, but I've wished for sometime that he would start blogging about art and culture as I haven't been able to bring myself to buy the Listener (the once-great NZ TV & culture weekly in which his column appears) for months now. Bound to be worth following what he's got to say via Twitter.

*It could be argued that the craft community back then wasn't nearly as interesting back then as it is now, with people like @Styler on the job.
Posted by Cheryl Bernstein at 8:58 PM

I had a Graham Storm platter fall from a great height and land on my head in the New Vision Gallery days - would that count? I slumped to the floor in a daze, with not 'new vision' but certainly very blurred vision, however, you will be pleased to know the platter was unharmed.Sue G