I've sat on a few committees in my time, and I've always been fascinated by the way they work. The first 'proper' committee I was appointed to, something or other to do with Women's Suffrage in the early 1990s, included a sole male member (so to speak) who had been put there -- or so he announced proudly -- as a punishment for repeatedly making sexist remarks in the council chamber.

On the committee, he referred to himself as 'a thorn amongst the roses', beaming genially round the table at the various representatives of women's groups. I recall that he spoke about the suffragettes' bloomers a lot, and consumed most of the sausage rolls. Meanwhile a couple of ladies in sensible shoes steamrollered through the agenda items they had [evidently] mutually agreed upon prior to the meetings. I sat there drinking endless cups of stewed Cona coffee and squeaking ineffectively from time to time. I was thanked for my contribution. Horrible outcomes were vigorously pursued. From this experience I learned pretty much all I have subsequently needed to know about the usual functioning of committees.

I was interested, then, to recently come across the great art historian Herbert Read's thoughts on selection committees in the arts. Here he is in 1948* speaking about the State's patronage of artists, in the 'selection of artists to work for the State and of works of art to be bought by the State':

"I have served on many such committees and in my experience only one of three things can happen:

1. something is chosen which offends nobody, beause its virtues are negative;

2. a little bit of everything is chosen to please everybody;

3. the committee agrees to be realistic and to allow one member to make the choice for all of them: the committee, that is to say, resign its functions in despair.

The first two possibilities merely lead to compromises: they do not imply intelligent patronage and can hardly be said to encourage the best in art. The third possibility is equivalent to the administrator's own choice, and the State is really paying for the indulgence of one man's taste, to which it then proceeds to give the sanction of its anonymous authority."

Knew what he was talking about, old Herbert. (Of course, a fourth possibility may be considered: that the composition of the selection committee and the significance of the opportunity might be such that after sparkling and impassioned debate and argument, a project of great merit and substance is selected to everyone's satisfaction. I have heard of such things happening, and occasionally -- very occasionally -- have even witnessed it.) 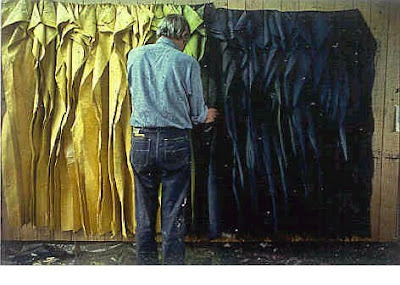 A friend who worked as a cameraman in New York in the early 1990s had a polaroid of a vaguely familiar older man stuck to his fridge door. Yes, he said, it was Clement Greenberg; he'd just shot a documentary about modern art in which he'd been interviewed. During the shoot, when Greenberg discovered that his cameraman was a New Zealander, he asked if he knew an artist friend of his from New Zealand. "Don, his name is. Don Peebles."

I think this story illustrates a couple of things beyond the one- or two degrees of social separation that New Zealand is famous for. At a certain level, the international artworld is a club, or more accurately a series of clubs, in which the members recognise one another by their achievements and mutual interests. One of New Zealand's pioneering abstract artists, and an influential teacher of several generations of artists, Don Peebles -- not one, I think, to blow his own trumpet -- was a significant figure in the history of abstraction, connected at the highest level of his field.

At one of the public galleries where I worked, Peebles was a legend among the staff for his no-nonsense treatment of one of his 'fin' paintings on loose canvas, like that pictured above: in order to remove creases which had resulted from transporting the work, he took the painting outside, threw it on the ground, turned the firehose on it, and proceeded to shake and wrestle it into submission. I always loved the idea of this rough-housing by the artist, in stark comparison to the careful white-gloved museum-standard treatment of the work by gallery staff. Peebles's physical tussle with his painting revealed an entirely different kind of relationship with an artwork, one which I've always found instructive when thinking about his practice.

I was deeply moved to hear that a week or so before Don Peebles passed away, he visited the Christchurch Art Gallery in order to see, for the last time behind the scenes, his many works in the city's collection.
Posted by Cheryl Bernstein at 1:14 PM 2 comments:

Last Sunday we drove up to the Port Hills in search of the landscape Doris Lusk painted in 1952. From the city below, the hills were shrouded in low cloud. It seemed doubtful we'd see anything at all, yet alone a sixty-year-old view. I was sure I'd seen it before; I distantly remembered driving along the winding hill road many years ago and catching sight of it suddenly from the car window and thinking oh, there's that painting; but I couldn't remember if the bend in the road where I'd seen it had been before or after Victoria Park or even beyond the Sign of the Kiwi, the second of Harry Ell's travellers' way stations which marks the high point of the road before the long descent to Lyttelton. The eroded valley Lusk painted might be anywhere really; and we prepared for a long drive.

I'd been thinking of the task like detective work, assuming that while the view might be quite changed, there would be certain features -- the bones of the landscape, if you like -- which would remain the same. Ignoring trees, we were looking for the silhouette of the hills, and perhaps the little volcanic knob in the foreground, much in the way you might discount the effect of the hair and focus instead on the shape of the head of a missing person you were trying to identify. (Our ostensible purpose was to add Lusk's location to the Christchurch Art Gallery's new geotagging project, which records the geographical coordinates of landscapes depicted in works from their collection.) In the event, we were a little disappointed to find Lusk's landscape so quickly, at one of the first entrances to Victoria Park, a walking track named for Harry Ell. While the trees had grown up thickly over the upper slopes, the fissured walls of the valley were unmistakeable. 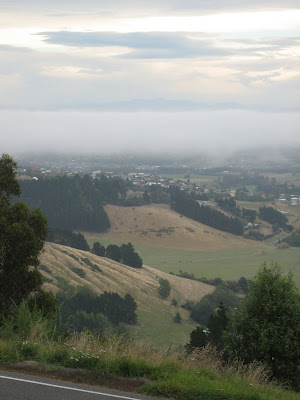 In search of Lusk's painting viewpoint, we took the steep track up through the trees into the park. There was a crossing of paths, and a knot of runners pounded past, shaking drops of sweat on to the ground. Further in, the pine needles were thick and soft underfoot, and our footsteps made no sound. Shadows fell sideways through the pines. I thought of Heavenly Creatures, and a brick in a stocking. The canopy blotted out the sky. It was impossible to see the valley below through the trees. 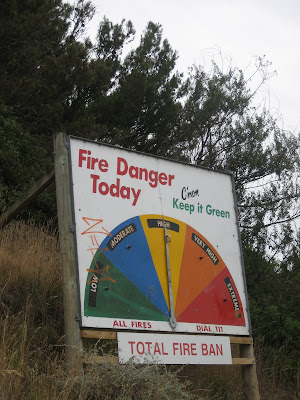 Frustrated, we climbed back down to the carpark, past the painted fire danger sign which from behind looked like an easel. Squinting through the trees, the viewpoint from the bluff above the carpark was almost the one in the painting, though a little to the right. 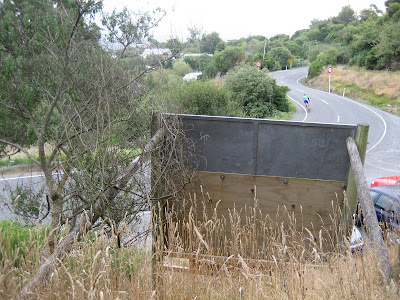 As we drove on, we wondered how Doris Lusk had got up here; we thought it unlikely she'd owned a car in 1952. Perhaps by bus? Or bicycle, though carrying the painting materials might have been tricky. But then artists at mid-century thought nothing of biking enormous distances in search of landscape subjects or to organise exhibitions: for his exhibition in Dunedin in the early 1930s -- the show which a young McCahon wandered into -- Woollaston sent his paintings down from Mapua by carrier, following later by bike. It's possible that McCahon's own epic journeys by bike were immortalised in his Six Days in Nelson and Canterbury, of 1950; there's a fancy that the streak of red down the centre of the panels refers to a graze he took in a tumble from his bike, but that's probably pressing the autobiographical factor too far. 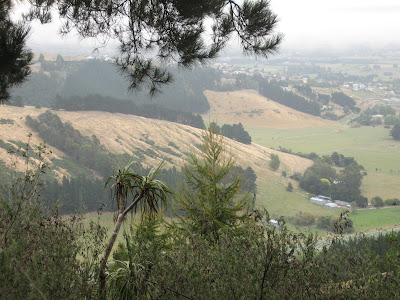 Lusk's bare hills were thatched with grass and tussock: grazing land. The early 1950s were arguably the highest point of agricultural optimism in New Zealand, a point at which national prosperity seemed inextricably allied to sheep farming -- much, perhaps, as it does to dairy farming today. As soil scientist Andrew Carran notes, since the wool boom and bust in the mid-1950s the same valley has hosted two crops of pinus radiata, a land use unthinkable at the time of Lusk's painting. Today there are clumps of pines and expanses of grass, some small buildings and an orderly market garden (perhaps a vineyard?) on the lower slopes. 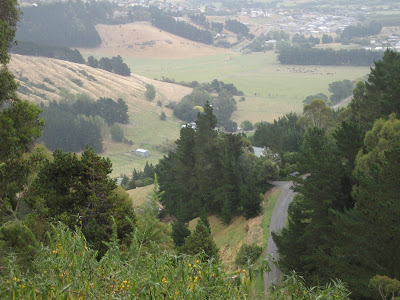 In search of a place to turn round on the narrow winding road, we drove on towards the Sign of the Kiwi. And as we drove back to the city, we finally saw it: Lusk's viewpoint on the distant valley. But there was nowhere to stop, and no way to climb up on to the thickly wooded bluff above the road. I took some photographs out of the car window, but it was gone in a flash. 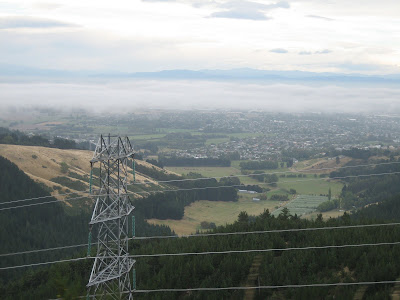 The blurb about Canterbury Plains from Cashmere Hills on the Christchurch Art Gallery's website has Lusk 'influenced' by McCahon, in her painting of the bare, unpopulated land. Certainly, they were great friends; they had known each other as young people in Dunedin, where they had both attended Russell Clark's Saturday morning art classes at John McIndoe's studio. Lusk later spent time in Nelson with McCahon and Woollaston and others, and when McCahon moved to Christchurch in 1948, he initially stayed with Lusk and her husband Dermot Holland, painting several of his major religious works in his small bedroom there. 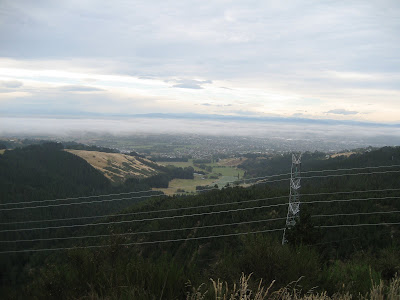 McCahon famously received a copy of Charles Cotton's Geomorphology of New Zealand for a wedding present at the time of his marriage to the painter Anne Hamblett in 1942, and his subsequent works demonstrate his study of the linear landforms pictured by Cotton. So, I would argue, do Doris Lusk's paintings of a similar (or perhaps slightly earlier) vintage: her Towards Omakau (c.1942) -- a comparatively little-known painting which I'd argue should be considered one of the key works of early modernism in New Zealand -- reveals a similar treatment of the folded hills in the distance. Perhaps, as is frequently the case, what art historians misleadingly describe as influence (a power relationship which almost always proceeds in one direction, from the more well-known artist to the lesser-known) is rather more accurately described by artists themselves as common interests. 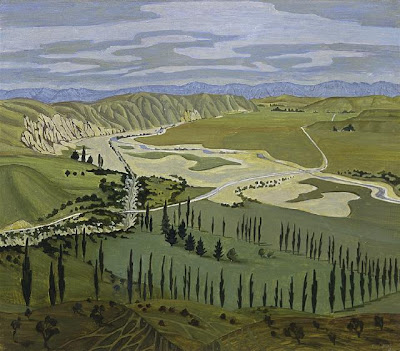 Doris Lusk, Towards Omakau, c.1942, oil on board, Collection of Christchurch Art Gallery
Posted by Cheryl Bernstein at 7:07 AM 6 comments: