Because George Lucas is not getting on with it quickly enough, the small guy has decided to write the next three episodes of Star Wars himself.

He's completed Chapter VII as a project for school: this is the genre-bending Chapter VIII, featuring The Beatles having a massive fight with Justin Bieber and a pack of zombies. In describing the narrative to me, the small guy said "And then I played a massive loud guitar chord, and defeated Justin Bieber with the power of music, and then the zombies woke up..." 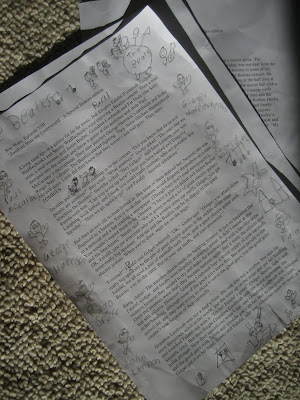 ‘Zombies from the Underworld’: A Special Beatles Edition

Part One begins
A long time ago in a galaxy far far far away, Jedi knights Falafel Pizzatush, Gidget Wafflechunks and Snotty Wafflechunks were enjoying a Beatles concert. Then a mad man, a mad woman, evil Justin Bieber, Grandma Loobrush and Fat Dude (the Sith) stomped into the concert and threw a guitar at the audience and stole Paul McCartney’s microphone. They also pinched George Harrison’s sandwich and broke Ringo Starr’s drums. The Beatles started fighting. They threw chicken drumsticks at the evil guys. Little did they know that they weren’t just bad guys. They were ZOMBIES.

Snoddle and Splott came running in to the concert. “Did you know that those evil people are zombies?” they cried. “What zombies?” Snotty asked. “The ones that are attacking the Beatles!” Snoddle yelled. “Hey Gidget!” said John Lennon, who was friends with him. “Can you come up here? I hear you have battled evil Emperor Laughing Sock before, and I think you could battle zombies, who are probably less harmful.” “Here we go again boys!” said Falafel. “Another adventure.”

Just then an evil old woman trotted in. But none of them noticed her, because she was disguised as a banana. You’d think that someone would disguise themselves as a man in a raincoat and a hat reading a newspaper. (Though hats don’t read newspapers.) You wouldn’t expect them to be a banana. “I have a plan to defeat evil Justin Bieber and his henchmen,” Snotty said. “We’re going to need a lot of giant electric guitars. OK, Falafel, you get everyone who isn’t a zombie some ear muffs. Gidget, you get some really big speakers. And me and the Beatles can be in charge of the giant electric guitars. When you’re done, meet me on the stage.” 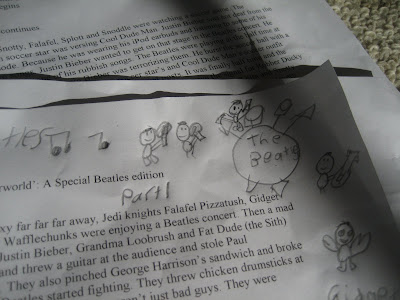 “Finished!” Felafel and Gidget wheezed. “OK,” Snotty said. “Gidget, you attach those really big speakers to the pile of giant electric guitars in the middle of the stage. Falafel, we all need a pair of earmuffs each. Now, grab a giant electric guitar each. Beatles: you do the same. Put on your ear muffs, and start strummin’.”

Bang, clatter! The massive chords made the building tremble. It just so happened that Falafel, Gidget, and Snotty were hopeless at playing guitar. It didn’t matter at that moment because they needed to try and make the zombies deaf with a horrible noise. Once the zombies were deaf, they became humans again. But it made the villains deaf and still villains. However, Grandma Loobrush kept a secret supply of pink earmuffs in her handbag, although none of the good guys knew this. But some people in the crowd did, and they were trying to shout it out to the good guys, but the good guys couldn’t hear because of their earmuffs.

Grandma Loobrush was not a deaf villain. She was also not a zombie. She was the most dangerous witch in the world, and she went up on the stage and got her handbag and knocked Falafel out with it. “Oh no! Falafel’s gone!” Gidget, Snotty, Splott and Snoddle cried. But they fought Grandma Loobrush with her worst nightmare: the toilet plunger. Now four against one wasn’t fair, and Grandma Loobrush was defeated and the good guys won. Splott and Snoddle got it on her feet so she couldn’t walk; Gidget got it on her head; Snotty and Falafel, who was conscious again by now, got it on her arms. And so she didn’t make it. And to celebrate their glorious victory they went to the movies. And the Beatles went with them. 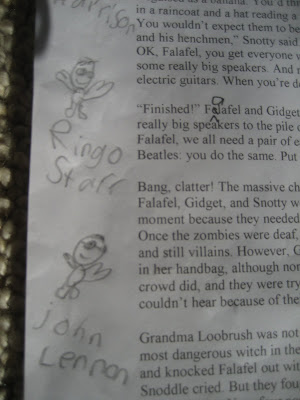 
Gidget, Snotty, Falafel, Splott and Snoddle were watching a soccer game. The Brazilian soccer star was versing Cool Dude Man. Justin Bieber was not deaf from the last episode. Because he was wearing his iPod earbuds and listening to some of his favourite songs. Justin Bieber wanted to get on that stage in the Beatles concert. He wanted to sing one of his rubbish songs. The Beatles were playing at the half time at the soccer stadium. Justin Bieber was terrorizing everyone. He burst the soccer ball with a pin and he switched the Brazilian soccer star’s and Cool Dude Man’s soccer outfit with tutus and hung his washing on the goal posts.
It was finally half time and the Beatles started playing Here Comes the Sun. Justin gave the signal for Robber Ducky to attack the Beatles. But Falafel was waiting for him he punched him and Snotty attacked from the rear. The Beatles song was done by then so the soccer players started playing. Cool Dude Man accidentally kicked the ball into Robber Ducky’s shin; he screamed and then collapsed. Robber Ducky was defeated. Next Splott and Snoddle got out their catapults and fired water balloons at Justin Bieber’s hair. “My beautiful hair” he cried then he collapsed and that was the end of him.
The End
Posted by Cheryl Bernstein at 9:28 AM 1 comment: