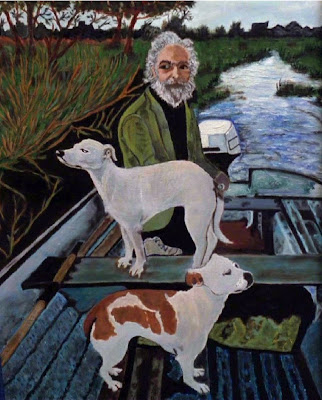 Without a single doubt, the best art dialogue in any movie is the scene which takes place at Tommy's mother's house in Martin Scorsese's Good Fellas, after Billy Batts gets whacked and Tommy and his friends pop round in the middle of the night to pick up a spade. Tommy is played by Joe Pesci; Jimmy is Robert de Niro; Catherine Scorsese, the director's mother, plays Tommy's mother. Nearly the whole scene is ad-libbed.

MOTHER: Have some more. You hardly touched anything. Did Tommy tell you about my painting? Look at this.
(Pulls out an oil painting from alongside the refrigerator.)

TOMMY: I like this one. One dog goes one way and the other goes the other.

MOTHER: One's going east, the other’s going west. So what?

TOMMY: And this guy's saying, "Whaddya want from me?" The guy's got a nice head of white hair. Beautiful. The dog it looks the same.

TOMMY: Without the beard! Oh no, it's him! It's him.
(A thumping noise is heard through the open window from the trunk of the car parked outside.)


The oil of the two dogs was painted by Nicholas Pileggi's mother, and is based on a photograph from the November 1978 issue of National Geographic. Pileggi was the author of Wise Guy, a treatment of the life of gangster Henry Hill, on which Good Fellas is based. As chance would have it, Pileggi was present in 2006 when friend and casino developer Steve Wynn accidentally stuck his elbow through Le Rêve, a Picasso painting that Wynn was about to sell to hedge funder Steve Cohen for $139 million.

*Image from The GoodFellas website.
Posted by Cheryl Bernstein at 12:06 PM