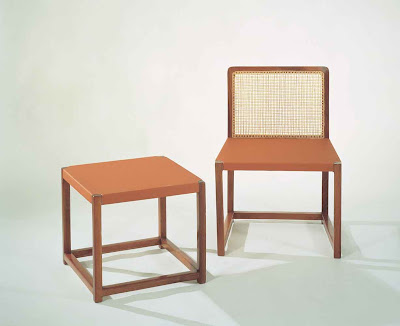 
When the uncompromising expatriate Austrian architect Ernst Plischke arrived in New Zealand in 1939, he refused to sit the Royal Institute of British Architects examinations which were necessary in order to be registered as an architect in this country. (He got round this by working in partnership with other registered architects, producing some of New Zealand's finest modernist buildings, including the extraordinary Sutch House in Wellington and the glass-curtained Massey House on Lambton Quay, Wellington's first modern skyscraper.)

In his The Nationbuilders, an account of the individuals who shaped the New Zealand nation in the middle years of the last century, Brian Easton recounts a story told by Plischke's stepson, Henry Lang, economist and first chair of the Wellington Sculpture Trust.

Plischke, who had originally worked in his family's joinery business, went to a company of New Zealand furniture makers and offered to design them some modern furniture. The proprietors of the company explained that they had no need of his assistance, showing him the pictures in a European design magazine from which they had taken their ideas. They were Plischke's own design.
Posted by Cheryl Bernstein at 9:17 AM