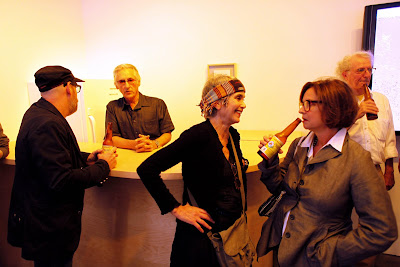 Image: Drinking at the Hammer Museum, with Ed Ruscha behind the bar and Tom Marioni to the far right. Credit: Michael Robinson Chavez for the LA Times.


‎"The act of drinking beer with friends is the highest form of art." San Francisco artist Tom Marioni, author of a memoir entitled Beer, Art and Philosophy, has put together a series of beer-fuelled art happenings since 1970 which have taken place variously in his own studio, museums, and neighbourhood bars. A show of his work (and five accompanying invitation-only beer salons, at one of which his friend Ed Ruscha tended bar), has just opened at the Hammer Museum in LA.

The public are invited to a performance later in the month called 'The Beer Drinking Sonata for 13 Players', in which players blow into the bottles after each sip, so that the tone -- so to speak -- gets progressively lower and lower. (Have a feeling I might have seen something similar done in a student flat in Christchurch in the 1980s.)

When asked by writer Jori Finkel if he agreed with Marioni that drinking beer was the highest form of art, Ed Ruscha commented: "I don’t know about a form of art; a form of life maybe. But you can call anything art, and that’s Tom’s thing. And I like the beer part of it."
Posted by Cheryl Bernstein at 10:00 AM

Hello
You may like to know that Andrew Bogle curated one of the first survey exhibitions of the graphic works of Ed Ruscha for the Auckland Art Gallery in 1978. I wrote an account of the exhibition in Reading Room issue 2, 2008.
Regards,
Ron