An unintended consequence of having children is that one's movie consumption goes right down. Neither the antenatal classes nor the parenting manuals think to mention this, but they should: it's one of the biggest of the many changes that are wrought in one's previously comparatively spontaneous life. Once upon a time, the big guy and I would go to the movies almost every week. We lived five minutes walk away from the largest screen in the Southern hemisphere, or so the proprietors claimed: at a moment's notice we could run down the hill, buy the tickets, stop for a popcorn and be seated before the feature started. We'd see just about everything that played, from big budget Hollywood actioners (a mutual weakness) to sensitive European low-budget dramas (though rather fewer of the latter than the former if I am being entirely truthful). The only films we wouldn't go to see were those which we knew beforehand were subtitled; the reason for this is complex and will probably be the subject of a later blog post.

What with one thing and another, I haven't been to a movie that is not animated nor has anything other than a G rating for at least two years. (Surf's Up, anyone?) Today, however, I found myself heading for the inner city Metro Cinemas for the one o'clock screening. The movie I saw is nearing the end of its run. I took this photo just before the lights dimmed. 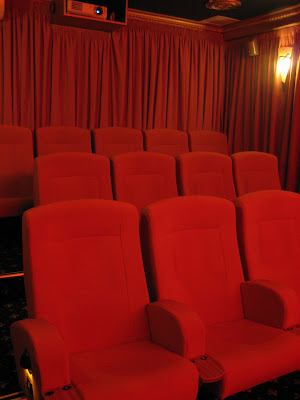 (Like this everyday for Howard Hughes of course.)
Posted by Cheryl Bernstein at 7:38 PM

I recently went to a 'real' theatre to see "Rain of the Children" - First time in 6 years for a proepr movie (I'm not counting Surfs Up!!).