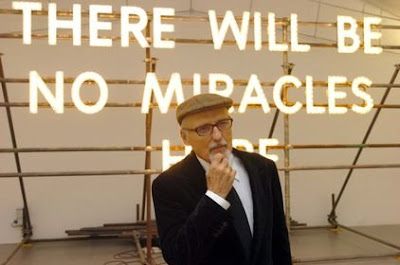 "Why," ask the editors of Frieze magazine, should the Turner Prize prove to be "always such a lightning rod for bewilderment, bile and blood-vessel-busting debate?"

They muse on the continued hostility and agression of the British press to the prize ("The sport of Turner Prize-baiting is as predictable as rain at Wimbledon", as reflected in recent headlines:

and consider some vitriolic quotes about the current show from nationally prominent art critics:

After reflection, the overarching explanation that the Frieze editors arrive at for the media's agression towards the Turner Prize is the historical uneasiness of post-reformation Britain towards visual culture. Getting big money for making up stories (e.g. The Man Booker Prize) is acceptable in modern Britain, but somehow making art isn't. Then again, it could be a contemporary problem: the journalists dealing with British art, Frieze suggests, celebrity- and personality-obsessed star-fuckers one and all, are still stuck back somewhere around 1997, when "Tracey Emin, Jake and Dinos Chapman and Damien Hirst [were] still livin’ it up at the Groucho Club, causing controversy everywhere they go". The scene's changed, but the reportage hasn't.

In reading about this (and the controversy -- or media beat-up -- caused by Turner Prize winner Mark Leckey's published thoughts about Damien Hirst and Banksy), I've been wondering why New Zealand's equivalent of the Turner Prize, the Walters Prize, doesn't seem to engender the same degree of public disapproval. Sure, Artbash gives it what-for, but the Walters Prize doesn't seem to play in the papers with quite the same sort of mad knee-jerk foaming-at-the-mouth inducement to bile as the Turner. (Leave that for NZ's participation in the Venice Biennale.) The Walters comes and goes every couple of years with nary a public murmur nor a change to the press release put out by the organisers before it's printed in the papers. Can New Zealand's mainstream media and general public really be more art-historically enlightened than the Brits, or is it rather that the Walters Prize has failed to capture the public imagination to the same degree?

That may well be a good thing, mind you.
Posted by Cheryl Bernstein at 8:28 PM

Email ThisBlogThis!Share to TwitterShare to FacebookShare to Pinterest
Labels: art and the media, Walters Prize