Woke up to a truly great article in this morning's Guardian online (e.g. one constructed on just the sort of nonsensical track along which my own idle mind runs): newspaper blogger Scott Murray's ranking of six great TV title sequences.

I was completely with him on the quintessentially British existential angst of Reggie Perrin's naked pasty white bottom disappearing out to sea. Then I was bizarrely charmed to see the relentless twinkly creepiness of Picture Box again, which Murray accurately describes as "an utterly hypnotic film of a revolving jewellery box set to a pipe-organ waltz banged out by the hooves of Diablo himself".

And there's no question, of course, at least in our house, that the opening titles to Hawaii Five-O represent one of the greatest works of art of the late 20th century. (The title zooming up against the huge curling wave! The hula dancer! The molten lava flows! The jerky camera work, extraordinarily prescient precursor of a dozen nineties police procedurals! And that mad kamikaze helicopter shot which looks like it's going to end very badly indeed on the skyscraper's cornice, but which instead culminates in Jack Lord giving it, as Scott Murray says, the full Elvis from the balcony. Oh yes. Bring it back, please.)

But as for the chippy animated titles for The Good Life where the pastel flower petals slowly reveal the show's title, a sequence which Murray compares to the best productions of Saul Bass, the designer of the seminal graphics for Otto Preminger's The Man with the Golden Arm, as well as title sequences for Psycho, Casino and North by Northwest, among many, many others ... No, no, a thousand times no, however many happy pre-watershed evenings in the mid-70s Murray spent watching it. (As did I, armed with a large bowl of Bird's Angel Delight. This was England.) Sorry, but absolutely not. You might as well include the opening titles for the Two Ronnies. 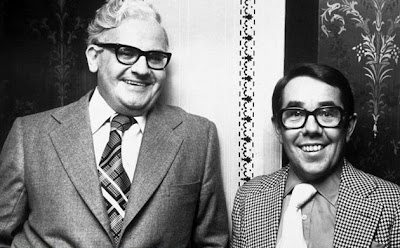 Now, I have the greatest respect for anyone with the temerity to put out "best of" lists in the public arena. It's a practice that takes an ounce or two of courage -- or equally the possession of the hide of a rhinoceros. To broadcast one's personal opinion on cultural matters inevitably invites -- at least if the Arts and Letters to the Editor pages of The Press are anything to go by -- dissension, disagreement, and quite probably ad hominem attacks. Many times I've thought that an art curator who puts together a group show, or an editor who produces an anthology, might as well pin a sign to the seat of their pants saying "Kick me". Any reviewer worthy of the name, whether amateur or professional, whether writing in a public forum or chewing the private fat, will immediately come up with several sterling examples of notable omissions from the enterprise as well as several unpardonable inclusions. Ha! Woeful. Take that, etc. That's why curators, editors, bloggers and other assorted cultural list compilers should ideally be drawn from among the ranks of those who like a good argument. Rarely, however, is this the case. (Although blogging makes the possibility of a good stoush far more immediate than in years past.)

Having been on the sharp end of some pointed second guessing myself over the years, it is therefore somewhat sheepishly that I propose some addenda to Scott Murray's list of the great TV opening credits.

For example: how could he have possibly gone past The Prisoner? "I am not a number, I am a free man!" Rev engines. Enter mysterious man in top hat. Cue nerve gas through the keyhole. Etc etc.

For old times sake, I'd definitely pop The Professionals in there ... if only for the titles' undoubted role in the building of genuine excitement each week. "Anarchy. Acts of terror. Crimes against the public. To combat it, I've got special men. Experts from the army, the police, from every service. These are the professionals." Right you are, Cowley old son. Send 'em in.

And then there's the good 'ol boys. Just can't help myself with this one. Guitars, car chases, explosions, cut off shorts, Waylon Jennings; what more could you ask for? As if that weren't enough, the big guy's stories about he and his mate climbing in and out of the windows of his '67 Datsun Bluebird in emulation of the General Lee are the stuff of (rather dubious provincial) legend in our house. (It's just not the same these days with a Holden Vectra and a suit.)

And of course there's The Avengers, and Doctor Who, and Blakes Seven. But the real contender, the one that might actually give Saul and Elaine Bass a run for their money, is David Milch's opening sequence for Deadwood (which as I may have mentioned before is clearly the best programme in any genre ever to appear on TV, ever). Guns, blood, mud, grit, gold. I must have watched it fifty times without tiring of it.

Jeez Scott Murray, The Good Life? What were you thinking?

Posted by Cheryl Bernstein at 12:29 PM