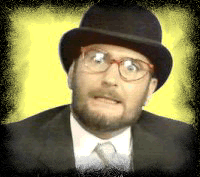 This morning, I am irritated. I have the hump. I am toey, I am cross, I am vexed, I am incensed, I am quite possibly incandescent with rage. I feel like the mad angry man in Kenny Everett's legendary 'Angry of Mayfair' sketch, railing against the world and attacking the TV camera with a vicious furled brolly. Grrr! Take that, you filthy swine.

What's exercised me is a small piece of local news, which wouldn't warrant being picked up by the national news services, yet it's part of a growing national -- not to say international -- problem.

Here's the story. A developer, responsible for various vile cookie-cutter subdivisions with "executive residences" picked out in poo-coloured brick on tiny sections on the city's old green belt, wants to demolish century-old farm buildings at Mount Magdala, on the outskirts of Christchurch, to put up still more of these. 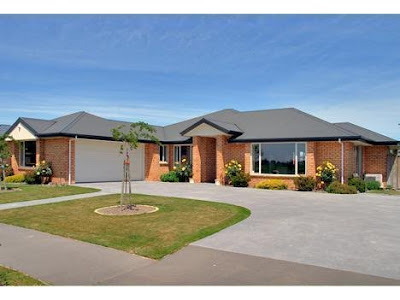 The notable farm buildings under threat of the bulldozer are unusual in the history of New Zealand's rural architecture in that they were brick-built in the European style enclosing a cobbled central courtyard. The buildings have a group 2 heritage listing in the Christchurch City Plan, which requires a resource consent for their demolition. Even an architect hired by the developer to assess their heritage status confirmed that they should be retained. 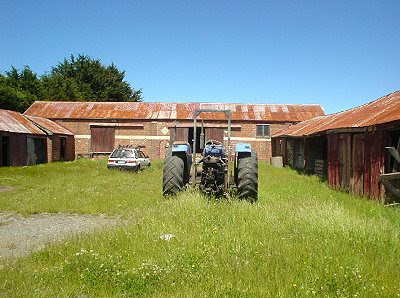 A consortium of the New Zealand Historic Places Trust, the Christchurch Civic Trust and the Halswell Residents' Association urged the council to buy and restore the buildings for an estimated $752,000, suggesting they would make ideal artists' studios, and perhaps a cafe or neighbourhood tavern, but the Christchurch City Council swiftly rejected the idea at a meeting in April, giving their consent to demolish the buildings. The Council's fallback position was to agree instead to spend $75,000 installing a "gazebo" on nearby reserve land recording the historic importance of the area and the farm buildings. The heritage consortium then took the Council to the Environment Court.

This morning I read in the Press that the legal appeal has been thrown out of the Environment Court due to a technical error by the Council, which had provided a map showing an incorrect location for the buildings, thus rendering their supposed Grade 2 historic "protection" null and void. The buildings had no protection, because the map was inaccurate, therefore there was no case to be argued either way. Thank you and good night.

Presumably the bulldozers are revving their engines as we speak.

As this story's developed over the past year, I've noted various instances of what city councillor Yani Johansen describes as "cultural terrorism". Developers, he says hold "heritage buildings hostage. They then demand excessive amounts of money from a public body in order to secure their safety." You might also call it visual vandalism, cavalier disregard for our history, or sheer low-level venality. (With Mount Magdala one might now also add, incompetence, but then having worked in the public service myself I know that things are not always what they seem.)

What amazes me is the lack of comprehension that retaining heritage buildings actually contributes to economic development. People want to live in good-looking cities! All around the world, where tough sanctions have been effected to stop the developer's wrecking ball, property prices have risen steadily and creative, economically-productive people have been attracted to move in. Although no doubt well-intentioned, erecting a gazebo with a notice commemorating the notable historic building that once stood on the spot is simply ridiculous. 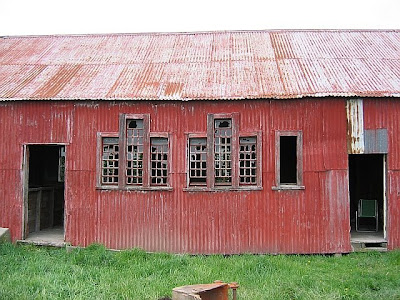 So, once again, a gated subdivision with no public or commercial buildings will rise up in the middle of what was farmland. As many houses as possible will be shoe-horned into the site. Without local shops or community amenities of the sort which could have been retrofitted into the Mount Magdala farm buildings, women and small children will be trapped out there during the day, needing to hop into the car even to pick up a bottle of milk. The breadwinner will need another car, to join the endless nose-to-tail single-person commute into the city each morning. No wonder each house comes with at least a double garage.

For all its erroneous pretensions to be a city which takes pride in its built heritage, this kind of issue isn't peculiar to Christchurch. I've been struck by the resonance of the unhappy fate of Mount Magdala's farm buildings to the similarly-aged Dakota Stables on New York's Upper West Side. Just about to be designated a historic landmark building on account of its round-arched windows and serpentine ornamentation, a demolition crew was hired to hack away at the building's notable cornices.

As the New York Times reported:

"Once the building’s distinctive features had been erased, the battle was lost. The commission went ahead with its hearing, but ultimately decided not to designate the structure because it had been irreparably changed ... The strategy has become wearyingly familiar to preservationists. A property owner is notified by the landmarks commission that its building or the neighborhood is being considered for landmark status. The owner then rushes to obtain a demolition or stripping permit from the city’s Department of Buildings so that notable qualities can be removed, rendering the structure unworthy of protection."

It seems that NYC, like Christchurch, has a city plan you could drive a bulldozer through. And developers frequently do, with impunity. Urgent legislative changes to protect our built heritage are needed at a governmental level to shut this nonsense down.

Quick, where's my brolly? I feel a savage venting of spleen coming on...
Posted by Cheryl Bernstein at 8:03 AM

Thats terrible - I hate this wanton distruction of history in the name of...well crap really. However reminding me of Angry of Mayfair gave me a smile. I used to be such a Kenny fan! I'm off to Youtube now

Shame on the Christchurch City Council for happily letting this happen.

There is no shortage of suburban sprawl, but interesting, significant old buildings can't be built.

Undermining our basic rights to a heritage conservation system that really serves the public interest, not even the weight of public opinion is sufficient to impede the greed and neglect that are destroying this city's cultural heritage.

The map was wrong? So how does that change the heritage value of these buildings? What an awful loss. I live in Waihi and millions was spent to move a concrete pumphouse...paid for by the mining company that operates here...supposely to save the heritage building which was sinking (mining company denied it was their activities causing it but paid for it anyway). Obviously it was of commercial value to "save the building" (the original side is adjacent to their gold mine pit). That's what's important these days it seems, making money. Guess the council decided they were financially better off allowing the buildings to be demolished and the land subdivided - they're beautiful old buildings, I can imagine you're angry. So am I.