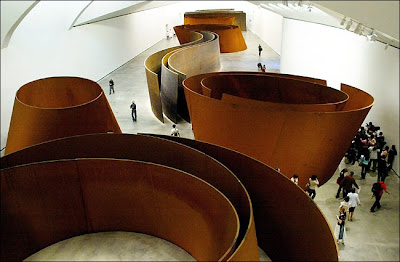 Richard Serra, The matter of time, an installation of 8 sculptures, completed 2005, weatherproof steel, at the Arcelor Gallery, Guggenheim Museum, Bilbao.


Think of steel as a medium for making art, and perhaps more than any other artist, sculptor Richard Serra immediately comes to mind: over the last three decades his work has explored the physical properties of the metal, in epic-scaled sculptures which dramatically alter your perceptions of the internal and external spaces they're installed in. (Serra had steel in the blood: his father worked in a shipyard, and the artist supported himself by working in a steel mill while he studied at Yale.) His massive sculptures seem both beautiful and physically intimidating, as if by comparison to the sheer heft and torque of the steel walls that soar above the spectator you're unavoidably confronted by your own relative puniness and fragility. (It's much like the experience, actually, of standing on a dock next to a gigantic ship.)

"The thrill induced by Richard Serra’s sculptures doesn’t come from the sense that they might crash down at any moment. As this exhibition proves, it occurs due to the delicate manner in which they stay up, and the subtle way Serra manages to bend our experience around them."

One of the best art films I've ever seen, Alberta Chu’s 2003 documentary Seeing the Landscape documents the five-year long installation process of Serra's monumental Te Tuhirangi Contour, commissioned for New Zealand businessman Alan Gibbs's farm out of Helensville, and one of Serra's largest works. There are many seemingly dangerous moments in the film, provided not only by the enormous sheets of steel used to make the work (875 feet by 20 feet of 650-ton steel) but by the evolving relationship between the equally strong-minded collector and artist.

In a recent interview with the Art Newspaper's Louisa Buck, Serra -- who expresses surprise that an audience has developed for his work -- discusses his feeling for his chosen medium in a statement which is bound to be much-quoted:

"When I first started working in New York I was working with molten lead and I was working with rubber and I didn’t want to go to steel, not because I didn’t know enough about it, but because it really had been the traditional material of the 20th century in terms of sculpture. But for the most part no-one was using steel in the way that I understood it. It had not been used for its weight, its counterbalance, not for its cantilever nor its stasis or gravitational load. It had not been used in the way that it had been used in the industrial revolution in terms of building processes and procedures.

"Instead what they had done was to cut and fold it and use it as kind of three dimensional surrogate for painting. It was hung out in space and painted to have a 3-D planar look so its basic fundamental balance was untrue. It was either bolted into the ground or welded up in the air, then held with a staff and painted green, blue, pink or purple or whatever, so that its inherent properties of gravity were being denied in favour of its visual image readout. But although that was very, very successful for years it was also a limitation and it always remained the handmaiden of painting. I think [Ad] Reinhardt said that sculpture was something that you bumped into when you were backing up from looking at a painting."

Not much chance of that with a work by Serra.
Posted by Cheryl Bernstein at 9:26 AM