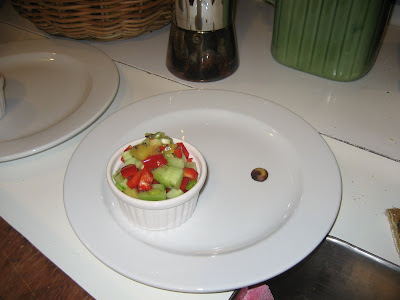 Pareidolia is the tendency to interpret a coincidental visual stimulus as something already known to the viewer, and is related to the "paranoiac-critical method" beloved by Salvador Dali, in which the identities of objects are unstable and mutable, and an image of one object gives an affordance of another.

The word comes from "para", or "wrong", and "eidolon" or "ghostly vision". Many examples of pareidolia involve images of powerful entities popping up where one least expects to see them: there's the man coming out from behind a cliff on Mars, seemingly unconcerned that the Hubble telescope has snapped his picture; Darth Vader appearing bold as brass in a nebula photograph taken by NASA; Mother Theresa as a cinnamon bun and the face of the Virgin Mary in a miraculously mould-free cheese sandwich; not forgetting of course my own recent encounter with a world-famous musician.

What is it about corn fritters and their mystical powers? Here's a test-piece of fritter the big guy made the other night which formed itself into a distinct yin yang symbol. Our household has been in a state of perfect equilibrium ever since.
Posted by Cheryl Bernstein at 9:55 AM

What a brilliant post on pareidolia! Thanks so much - tbh I didn't know about its relation to the paranoiac-critical method. That is useful to know.