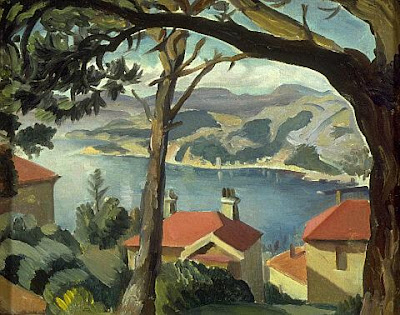 
Surrounded by "very dim and brown" oil paintings and their makers at the Academy of Fine Arts in Wellington in the early 1930s, British painter Christopher Perkins unpopularly remarked that he seemed to be expected to be "some kind of missionary for modern art".

Perkins, who somewhat romantically saw himself as "a kind of respectable Gauguin" on his journey to the south seas, had accepted a job in 1929 teaching life drawing and painting at Wellington Technical College under a governmental programme which brought in working artists from overseas to lecture in the fine arts. The La Trobe scheme attempted "to counteract the effects of isolation and indifference to the arts that prevailed in New Zealand at that time," wrote Perkins's daughter, Jane Garrett, reflecting on her family's five-year sojourn in New Zealand.

"All New Zealand historians of the period agree that the 1920s were a time of almost complete stagnation as far as the visual arts were concerned," continued Garrett.

"There were several good reasons for this state of affairs, of which perhaps the most important was the remoteness and isolation of the country from the art centres of the world. Another was the scarcity of talented young artists, most of whom had left to study abroad before World War I, or had been swept into the armed forces. Most of those who survived had preferred to remain and practice their art in Europe rather than return to starve in a cultural wilderness. The few painters who did stay at home tended to produce insignificant or derivative work, interpreting the New Zealand landscape in terms of a Scottish loch or Cornish beach."

"As to the general public, it was as indifferent to art as it was ignorant of it, an attitude shared by the authorities of the day, who showed little interest in anything that did not directly affect the production of sheep, butter, and apples."

Re-reading Jane Garrett's sometimes very funny account of the Perkins family's experiences in New Zealand, I've been struck, not for the first time, by the sheer intensity of the claims of hardship faced by early and mid-20th century artists in this country. Not that I disbelieve Garrett's description of New Zealand society's general indifference to the visual arts in the 1930s; I'm sure it was exactly as she says. Neither do I discount Gordon Walters's much-quoted accounts of the particular difficulties faced by the abstract painter in the 1950s and 60s, nor dispute the justifiable bitterness McCahon felt on being confronted by ridiculous barrages of hostile criticism from the late 1940s onwards.

What I've been wondering about is whether the difficulties faced by modernist artists in New Zealand were much worse (more harsh, more indifferent, generally less professionally congenial) than those faced by progressive artists working in other western countries at the same time, or even in Britain itself. The extreme difficulty of being an artist in this country is a constant theme in New Zealand histories and memoirs of the period, yet I've found nothing to test it against.

Was the problem primarily one of lack of patronage -- that until comparatively recently there were no major private collectors of progressive art, nor any state support for it? (Garrett notes that the only state-subsidised artist in Wellington in the early 1930s was the City Organist, "whose chief official business was to play See the Conquering Hero Comes whenever the All Blacks returned to Wellington.") Or was it simply a matter of scale? Perhaps with a population of just over a million, spread over an area as large as the British Isles, there just wasn't the critical mass of people around to enable the development of a self-sustaining intellectual coterie, like the Bloomsbury crowd or the Seven and Five Abstract Group, for example.

I'm thinking aloud; I'm not sure of the answer; but I'd like to be able to work out whether the hardship experienced by artists between say about 1920 and 1970 (which has defined the way much of our art history has been written) was a specifically New Zealand problem, or -- as I suspect -- a wider one.
Posted by Cheryl Bernstein at 1:34 PM

It's an interesting question. Australian modernists in the twenties and early thirties tended mostly to be well-off women like Grace Cossington Smith, Margaret Preston &c. It seems as though art was mostly a middle-class thing until the late thirties and forties when people like Albert Tucker, Nolan and Joy Hester really did scrape along. The Boyd family weren't rich but they had a kind of bohemian menage that kept them afloat. It might be true about the smaller population of NZ. I haven't seen any comparative study of this though.

Call me heretical, but I think perhaps, in some cases, in some regards, and with many other qualifiers, that the case may have been overstated.

Sure, there's the celestial lavatory comment, but from memory the Fairburn review consisted of a lot more than that one oft-quoted line. ARD seems to have suffered more than most writers in NZ from having single sentences plucked out of texts and re-used liberally (although, admittedly, I haven't read 'The Woman Problem' and doing so might sap my sympathy entirely!)

I reckon you could argue that McCahon's work was understood and supported from very early on - and by public/private figures like Charles Brasch and Ron O'Reilly.By 1960 you had Hamish Keith and Wystan Curnow on the scene. Sure - not everyone was there (particularly academic Wellington painters) but the opinions of more progressive people - and the opinions that have lasted - were supportive.

And regarding the Walters quote - it has an element of a self-fulfilling prophecy. Here's Nicholas Thomas : "From the time he began to exhibit his mature work in the mid 1960s, Walters was never marginalized or stigmatised to the extent that it has been asserted. His isolation was stressed in order to build the image of a creative figure far ahead of an indifferent and mediocre culture."

Hmmm. what are the CNZ figures? I remember off-hand that visual artists makes an average of $25K a year. Those who aren't selling really well or teaching in a tertiary institution (or picking apples, old skool style) are probably not that much better off than their predecessors ...

Thanks Bo3, I haven't read that piece by Nicholas Thomas -- I'll go and find it. Maybe it's significant that he's not a NZer: it goes entirely against the national canonical grain to suggest that our artists had it anything but tough. I'm beginning to suspect a certain back-handed boosterism has crept into the national account ...

Laurie -- further to what you say, I think it would be really interesting to read something which compared the actual experience of being a modernist artist in NZ and Australia. I'm suspicious about the idea that NZ artists might have had a harder time, been subjected to more ridicule, & generally overcome greater odds than artists in Australia during the same period; yet this kind of thing doesn't seem to appear to quite the same degree in the Australian art histories that I've read.

I'd suggest it's part of the NZ national character to paint oneself as hard-done-by yet ultimately triumphant (a little Ed Hillary in all of us). Which is maybe another way at looking at Nicholas Thomas's idea of Gordon Walters's critical isolation being exaggerated for effect. (Not necessarily by the artist, of course.)