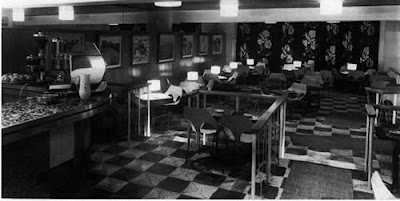 
I came across this description of Wellington in the 1950s the other day, in poet Peter Bland's autobiography Sorry, I'm a Stranger Here Myself. The city changed a lot over the ten years we lived there, but when we arrived in the mid-1990s I fancy there was still the faintest smack of what Bland describes.

"I shared a flat on Mount Victoria with a bunch of English immigrants and a Polish painter who later turned out to have copied everything he did from the work of a minor German expressionist. Wellington in the '50s was a drab but strangely cosmopolitan town, full of post-war European exiles, escaped Nazis (minor Jew hunters and concentration camp officials -- the big boys went to Brazil) and a gaggle of budding poets who aped Dylan Thomas and drank huge flagons of sweet, cheap local sherry that rotted their brains while fuelling both a heady romantic rhetoric and a strange hatred for someone called Sidney Holland. Dark fugged-up coffee bars slowly appearing throughout the city were full of sexual, political and poetic liaisons... It was, I thought at the time, a fairly Bohemian existence but -- looking back -- it was probably closer to Gorky's Lower Depths than it was to the Parisian cafe society we admired from afar." 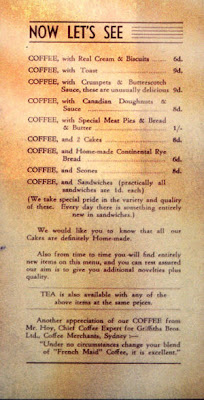 The "unusually delicious" menu for the French Maid Coffee House, 1940s, where Rita Angus, Colin McCahon, Gordon Walters and other progressive New Zealand artists exhibited, and Wellington's artists and writers gathered. Image from the Alexander Turnbull Library.
Posted by Cheryl Bernstein at 9:50 AM