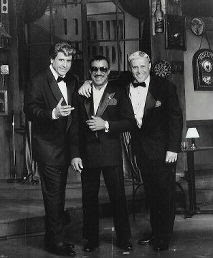 Some years ago in Vegas at a two-drinks-minimum lounge in one of the fading resort hotels at the north end of the strip, the big guy and I found ourselves sitting next to an intriguing-looking character in black who sported a cluster of signet rings like knuckle dusters and had a face that looked like it had gone a few rounds. We were there to hear hard-working Chicago singer Tony Ocean -- whose stage name was borrowed from Frank Sinatra's character in Ocean's 11 and who until recently had impersonated Dean Martin in a Ratpack tribute show -- croon his way through a long night of Vegas lounge standards. The man we were sitting with at the circular table looked like somebody, but we couldn't place him. Occasionally someone in the crowd would catch his eye, and he'd incline his head laconically, almost regally, in acknowledgement. Finally we could bear it no longer. We struck up a conversation.

The man in black introduced himself as Rocky Russo, an ex-prize fighter who had boxed professionally as a lightweight since the late 1940s. His main claim to fame, however, as he told us, was his appearance in the first Godfather film where he shot Sonny Corleone (James Caan) in the tollbooth. 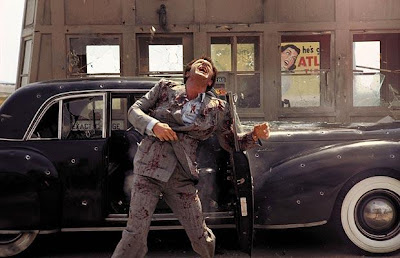 James Caan biting the dust in The Godfather. Photograph by Steve Schapiro.

After meeting Rocky Russo, we watched the film again to see if we could pick the ex-boxer out in the general melee of smoke and gunfire around Caan, but couldn't. I was interested to read the other day in the Telegraph that a series of behind-the-scenes images from the Godfather films taken by photographer Steve Schapiro (who also shot the poster image for Taxi Driver) will be exhibited at a London gallery early in the new year, while a limited-edition book, The Godfather Family Album, will be published by Taschen. Apparently James Caan was wired up to 147 separate explosive blood packs for the tollbooth scene, at that time an industry record. (The car behind him also seems to be peppered with what look like adhesive bullet-holes.) 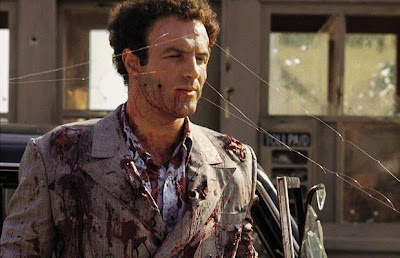 In one of the odd synchronicities which often seem to happen when thinking about blogging (or maybe it's simply the inconsequential train of thought in which I specialise), this morning on the way back from the school run I listened to Lynn Freeman's interview with national drawing award winner John Ward Knox, in which he described -- among other things -- his recent fight with a would-be bag snatcher, which left Ward Knox in ultimate possession of both his bag (containing his irreplaceable personal art journal) and a black eye. Audio available here for a limited time.

Horrible thing to happen, of course; but I must admit I rather admire someone prepared to put up their dukes in defence of contemporary art.
Posted by Cheryl Bernstein at 12:11 PM