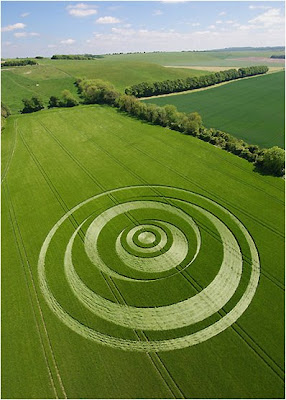 Bounded ring formation at Morgans Hill, Wiltshire, May 2008. From http://www.circlemakers.org/

Crop circles -- the large scale geometric designs which appear overnight in cereal fields in Britain -- are a phenomenon like alien abductions, the Apollo moon landing and the government suppression of free energy technologies, representing one of those absolute dividing lines between those who believe and those who do not.

On the one side, the crop-circle researchers fervently believe the designs have a non-human origin, and cite as their 'proof' anomalies in the electromagnetic frequency of the site; cereal stalks which are 'bent but not broken', or appear to have been subjected to a sudden great pulse of energy; as well as the relative complexity of the fractal geometries involved. Pitted against the 'Cerealogists' are the circle-makers themselves, who work in the dead of night armed only with balls of string (for marking out the elements of the design) and short planks (for flattening the crop).

Yet the two sides need each other, suggests John Lundberg, a graduate of the Slade School of Art and perhaps the pre-eminent British crop-circler. (Also implicated in the production of the notorious Roswell alien autopsy video, he's now an award-winning documentary maker who occasionally makes crop circle PR stunts for big companies and media outlets, including Shredded Wheat, The Sun, and Hello Kitty.) The crop circles are essentially authorless art works, he suggests, while the crop-circle followers act as agents for the work, propagating images of them across the globe and disseminating a mythology and folklore around them.

Circle-making was enormously attractive to Lundberg and his other artist friends: "We weren’t pushing paint around on a canvas that sat in a sterile gallery environment; we were quite literally forming and shaping the culture that surrounded us. The circles we created could be seen as virulent mind viruses or memes that traveled right around the world permeating both underground and popular culture."

I think this insertion of art into the common culture is what interests me most about the crop circle phenomena: it seems more of an effective political statement (about the nature of manufactured belief in the contemporary world, about the way in which big media need a constant supply of news odd-spots, about the way hoaxes and conspiracies form a critical tool) than much more overtly political art.

Interviewed by Henry Hemming in In Search of the English Eccentric, 2008*, John Lundberg commented:

"When I first became aware of crop circles, which was probably during the mid- to late 80s, I was willing to believe that there was something very odd going on, you know, something alien. This was when I was at art school. You see, I'd been interested in the paranormal from a very young age, but I'd never been able to combine my interest in the paranormal with my art."

"Then I had what you could call an epiphany. Suddenly I realised that making crop-circles presented unbelievably fertile ground in which to be making art. So I went out and made a crop-circle. I just wanted to see what would happen, and over the last ten years I've really begun to understand the effect of what I'm doing, and it's incredible. I mean it. I really think it beats the hell out of Richard Long or any other land artists... Because of the conceptual side of what we're doing. We're manipulating belief. They're just making sculptures."

*Best book I've read for ages. I've been wondering about an Antipodean version ... no shortage of material...
Posted by Cheryl Bernstein at 12:49 PM

Email ThisBlogThis!Share to TwitterShare to FacebookShare to Pinterest
Labels: art and popular culture, art and the media, land art

Cheers Martin, great stuff isn't it! I'm thinking of making one in our front lawn ... it's just about long enough ...