Send in a stenographer, stat

When I started working in my first professional position in an art gallery early in 1990, there were no computers in my workplace. It was like the office in Mad Men, but without either the public drinking in the afternoon or the shorthand dictation taken by glamorous young women. If you wanted to send a letter you had to write it out in longhand and put it in the head secretary's pigeonhole. She would prioritise typing jobs by the relative seniority of the staff. While the director's typing, which the head secretary did personally on her IBM Golfball, superceded all others, I suspect mine came last; it usually took two or three days to be returned to my pigeonhole in the staffroom, and was always done by the part-time typist. If there was an error in the typing, and there frequently was, you corrected it by hand and put the letter and the carbon filing copy back in the head secretary's pigeonhole, and the whole thing began again. It could take a week just to get a letter out.

This Dickensian communications system, which had clearly been operating for many decades, necessarily slowed the pace of business to a glacial crawl, which at the time was enormously frustrating but in retrospect was quite pleasant. You had a bit of time up your sleeve to think about things; it was physically impossible to act in haste. Sure, you could call your correspondent instead, but toll calls likewise had to be placed for you by the secretary, and were considered a bit of a luxury, especially for the junior staff. "Are you sure this is work-related?" "You've been making quite a few calls, lately, haven't you. I hope you're noting them properly so we can code them to your budget." The pressure was on to speak quickly. Ringing internationally was almost unheard of.

It's a way of working which the western world has long since left behind, with instant real-time communications and cheaper phone calling. It was ridiculously cumbersome, of course, but the pre-digital workplace had some advantages. You could concentrate on what you were doing; without email and txts and mobile phones you didn't get interrupted much, and could knock off all your correspondence before morning tea, leaving the rest of the day free to work on projects. I guess you could still act like that if you wanted, but it would take a lot of fortitude and discipline and would be a bit surprising for -- not to say profoundly irritating to -- your colleagues.

But no doubt I have been training the rose-tinted retro-spectacles on the past. In reality the analogue workplace probably involved just as much frustration, panic over deadlines and sheer grunt work as the contemporary wired office does. In my memory, the relative freedom of being digitally unconnected has loomed larger than the sheer teeth-grinding foot-stamping frustration of the golfball jamming at 4.55pm with a letter still to get into the 5 o'clock post. 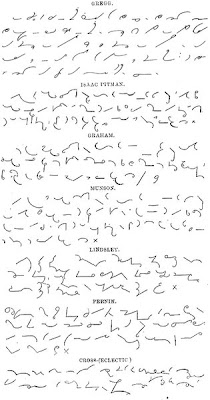 This morning I came across this description of New Zealand's National Art Gallery from 1961, in a book surveying the state of the arts in New Zealand.

"The National Gallery is staffed by two men and four women. The men are a Director and a general handyman carpenter, the women, an education officer, a secretary, and two clerks. There is no stenographer, and a large part of the time of all the staff, with the exception of the Director, is taken up with work for the New Zealand Academy of Fine Arts. In short, the Gallery is understaffed, with the result that last year the Director suffered from a serious breakdown and two of the women were absent suffering from the consequences of overwork."* 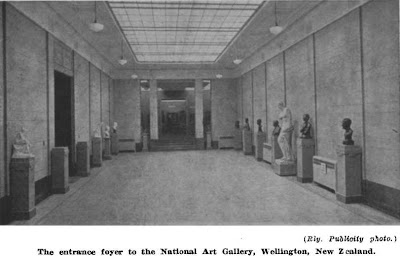 Foyer, National Art Gallery, c. 1937. I'd imagine it looked much the same in 1961. Image from the NZ Electronic Text Centre.

Next time I'm moaning about the lack of ability to go and see contemporary international art in public galleries in New Zealand, I'll remember that quote, I think. At a time when, say, MoMA was putting on exhibitions like 'Homage to New York: A self-constructing and self-destroying work of art conceived and built by Jean Tinguely' or 'Tangible Motion Sculpture by Len Lye', New Zealand's National Art Gallery couldn't get a shorthand typist while its staff of six had to run the local art society's programmes as well as their own exhibitions, travelling exhibitions, loans and education programmes. While New Zealand's public galleries still have a way to go in terms of being significant contemporary international players as exhibition generators, their position out of the starting grid is clearly a long way to the rear of the field.

As for me? Back to work in the home office. Lots on today. Now, if only I could get the big guy to take a letter...

Thanks for your comments on my rug photos.....I couldn't resist them. They reminded me so much of pinwheel scones...which, funnily enough, I've just made a batch of not half an hour ago. Suffice to say I will now over-indulge :-) ajr