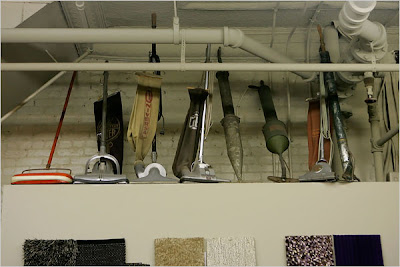 
If I had to name my single favourite thing about my contemporary digital life -- as opposed to the analogue history of the early 1990s I described yesterday -- it would be the ability to read the New York Times online. It's one of the first things I do in the morning, after I have spooned apricot porridge into the baby's mouth and slapped out rounds of vegemite-and-chippie sandwiches for school lunches.* What I read there sets me up for the whole day.

I bought a Sunday edition in Manhattan once. It was the size of a paving slab and had the heft of a brick. Too thick to fold, too slippery to clamp safely under my arm, it made my arm ache carrying it home. You could lounge around reading it in bed all day and still not get to the end. It felt like an artefact. I wanted to bring it home with me but it would have half-filled my suitcase. Proper newspapers like that -- with long investigative articles, international correspondents, fat arts sections crammed with incisive criticism, intelligent letters to the editor, and book reviews by notable authors and world-famous academics -- are to my mind one of the hallmarks of civilisation. The Press and the Herald look like the North West Suburbs Bugle and Shoppers Guide by comparison.

This morning I came across one of the nicest (most interesting, most endearing, most immediately making me wish I was there to see for myself) articles I've ever read in the NY Times. It describes the collection of vintage cleaning equipment amassed over 40 years by a neighbourhood businessman called Paul Swedlow, who until recently owned a carpet shop on West 17th Street. He's trawled flea markets and thrift shops to pick up dozens of rug-beaters, wooden carpet sweepers and old metal suckers which he displays in the shop, yet considers his collection unfinished as he still does not have the original Hoover, the Model O with cloth bag, patented in 1908, which he terms 'the missing link' of vacuum evolution. (The reporter notes that Mr Swedlow doesn't use the internet to look for his collection items; you get the impression that to a man like this, that would be cheating.) The picture above shows a primitive metal vacuum cleaner given to him by an arms dealer who mistook it for a bazooka. Or that's how he tells the story, anyway.

I think you have to have confidence in both your craft as a journalist and in the sophistication of your readership to run a story like this without trivialising the subject or patronising the interviewee. Most papers wouldn't go near it. It's neither news nor fodder for the gracious living pages. It's just a little local, human-interest, 'odd spot' kind of story, yet they run it perfectly straight and send a photographer to produce a portfolio of beautiful shots. A picture of one man's gentle lifelong obsession emerges, as well as his own take on an idiosyncratic taxonomy of display which is enormously appealing. And above all, Mr Swedlow's belief -- spoken and acted upon -- that these outmoded objects from earlier technological worlds are worthy of preservation, is something that's worth reading, and thinking about.


*Just a quick aside here. The big guy assures me that it's normal -- in fact obligatory -- to butter bread before you spread vegemite or peanut butter or whatever in sandwiches. I argue that that's two spreads, one on top of the other, fat on fat, and as such is manifestly unnecessary, wasteful, and in fact wrong; you only use butter or marge in sandwiches in order to prevent the ham or other solid filling from falling out. This has been a point of contention between us for more than a decade now. Your thoughts gratefully received.
Posted by Cheryl Bernstein at 12:24 PM

I am with butter, but then I have the flab to show for it too

The butter in a sandwich acts as a barrier to stop the spread from absorbing into the bread. It also lubricates the throat and aids with digestion. I'm with the big guy on this!

What could possibly be wrong with a spread on a spread? The big guy must have learned from parents that went to the same gastronomic school of sandwich making as my own. He is to be praised for his creativity and dedication to holding fast to his heritage!

I am for NOT having butter and a spread - first for cutting out the fat layer, good for another type of spread - the middle age type- and secondly for taste. As a die hard marmalade fan, I love twice as much marmalade on toast to make up for the lack of butter.

Thank you, Anonymous Person no.3. You clearly have excellent taste. (Rose's Lime Marmalade, by chance?)

No to unnecessary butter! Though, I must admit that this was learnt from growing up with a diabetic in the family...

I congratulate you for being most vigilant with your cause!

Hi CB, while Rose's Lime is ok, I tend to overconsume my own home made marmalade made from grapefruit gathered, like a localvore ( new word I have learnt) from the local public park which has old trees that drop more fruit than should legally be allowed hence making neighbourhood marmalade session almost compulsory.From Not so anonymous ( Sue G )