A few years ago, I went to a talk given by architect Ian Athfield. At the behest of the excellent Wellington Sculpture Trust, he was invited to speak about public art in Wellington. The talk was divided into two halves with, I think, a break for refreshments in between. Initially Athfield showed some dramatic images of the public sculptures which the Trust had commissioned for the city -- Phil Price's Zephyrometer fingering the wind on the way in from the airport, Ralph Hotere and Mary McFarlane's Ruaumoko (the Maori god of earthquakes) with its cascading letters and toppling columns outside Te Puni Kokiri House on Lambton Quay -- and so on. He didn't say a whole lot in the first half of his talk, just identified the works and let the images speak for themselves.

This was the kind of image Ath projected on the screen. 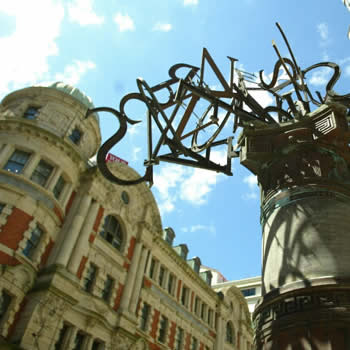 Here Hotere and McFarlane's work is shown to best advantage against a summer sky and the backdrop of the wonderful Edwardian Baroque facade of the Old Public Trust building (which houses Creative New Zealand) opposite.

For the second half of his talk, Ath showed another series of slides of the same works. As I remember it, while the first set of images were publicity shots of Wellington's public art taken by the Trust or the Council or Tourism Wellington not long after their installation, for the second part of his talk he had got someone in his office to photograph the public sculptures as they really looked. 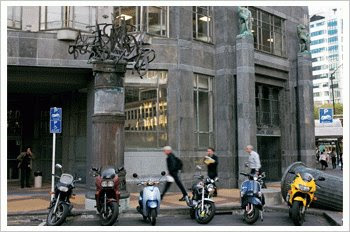 This is a very mild version of the kind of photograph he showed, which revealed the same works doing daily battle with street furniture, public and commercial signage, vehicles, grafitti and rubbish. While the initial images showed the works as resplendent and magisterial, dominating their surroundings, the second set showed them as subordinate to the vapid ugliness of daily life. As ever, Ath's ultimate purpose remained slightly enigmatic; he is not someone who labours an argument; I wasn't certain if he intended to chastise the Trust or the city planners or the artists themselves (though I doubt the latter). But the contrast between the published image and the real experience of public art was a good point well made, and one I've not forgotten.

Here's a similar contrast between real life in all its foulness and the art world's image of itself, posted this morning by one of my favourite local blogs -- the indefatigable Canterbury Heritage. Looks like Regan Gentry's work has to stand up to some pretty rough stuff, come the small hours.

Posted by Cheryl Bernstein at 9:37 AM