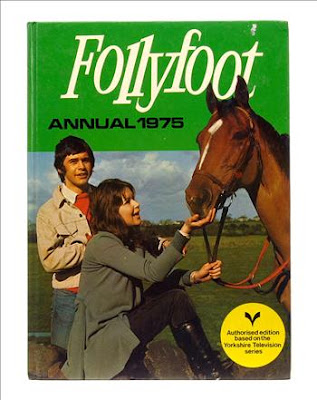 To the general disquiet of friends and family, I often start singing, quite unconsciously although with alarming volume, when I'm doing something dull like cutting sandwiches or putting the washing on. It's a nervous tic akin to that extremely annoying character in a Jacques Tati film (is it Les Vacances de Monsieur Hulot?) who continually hums brass band music under his breath, imitating the sounds of the instruments. "Tumtitumtitum, breet! breet!" This morning I was running through a brief but compelling medley of 70s TV themes (Warship, Black Beauty, Hawai'i Five-0) when I got stuck, as usual, on the lyrics to Follyfoot.

"Down in the meadow/ where the wind blows best/ the lightning tree/ stood up to the test./ Its heart went crack/ when it heard the clap/ the terrible crash/ of the thunderclap," I warbled. Not for the first time, I felt that this may not be the correct version, though I have been delivering it with gusto for several decades now. Struck with inspiration, I looked it up on YouTube.


Hmmm. Unsurprisingly, I found that I appear to have misremembered the words. (Though "the lightning rent from the firmament" would be a bit much for any 5 year old.) While it was a great pleasure to see the lovely Steve and Dora again, and also to clock that bit of by-play with the cap between Slugger and Ron ("Look over there!" "Where?" "Gotcha!"), it was oddly disappointing to watch.

It's not the thing itself. The characters are still strong: Dora leading the poor broken-down old horse and looking soulful under her early 70s Quattro helmet hair, a distant ancestor of the mullet; Steve tough yet approachable in his high-waisted jeans and leather jacket; the Colonel twinkly-eyed and puff-puffing in an avuncular fashion on his pipe. The concept has remained fine, its execution still a puzzle to young minds: are they all hiding behind the lightning tree in a line, waiting to pop out one by one, or is it a neat bit of stop-framery? (Dora appearing by magic in the shot might provide a clue.)

No, the source of my disappointment is, I think, the sheer availability of the clip; the way in which my memories of watching it as a small child have now been irrevocably altered by access to the original. It's not so much that I got the lyrics wrong -- a run-of-the-mill pop culture mondegreen which
I probably won't bother to correct; like Elvis, I do like the idea of a cracked heart -- but that my memory has now been overtaken by the new experience of watching it again.
Storytelling is all about the memory of a memory; it relies on distance from the source. It's as much about forgetting as remembering. Stories, like misremembered song lyrics, grow and change organically over the years until there's a point at which the original has almost entirely receded, and what you're drawing upon is the memory of having told, or sung, the story before. That's when it becomes personal -- your story, your song. So although YouTube is a vast collection of cultural memories, it equally promotes the death of personal memory through its perpetual preservation of the source. (Though I must admit it was good to see this again.)


Having access to the archives inevitably changes our view of history. In our increasingly digitalised world, I wonder if knowing in advance that something's going to be archived will change the kind of memories we'll seek to lay down.
Posted by Cheryl Bernstein at 9:35 AM

The Goodies and Folyfoot - I am instantly trasnported to my childhood!

Thanks for the comment, and glad you liked the clips. I have another post on 70s TV coming up next week. Nice post on your blog today, though I was looking forward to hearing more about 'Manky Chops'!