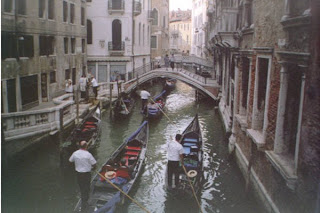 International arts bureaucrats racing to secure the top venues in advance of the 2009 Venice Biennale.

On boarding the vaporetto, it was the smell that first struck me. I suppose I shouldn't have been so surprised -- the canals are effectively the city's roadways, sewers, stormwater drains -- but like many New Zealanders before me, confronted with the strangely familiar amalgam of wet dog fur and sulphur, I thought crikey! Venice smells just like Rotorua.
Rumour-mongering about New Zealand's representation at the Venice Biennale is of course a national sport played at an elite level, rivalled only by grumbling about Creative New Zealand. Whiffs of various things to do with this year's selection process have been floating for a while now through the New Zealand diaspora (as Max Gimblett recently termed the nearly 1 million of us abroad at any time, though I wouldn't imagine everyone's interested in contemporary art). Picking up strength back home in the anaspora, the rumours of who's been selected and rejected to represent New Zealand at the 2009 Venice Biennale went viral sometime last week. This morning, finally, we could read the country's worst kept art secret in the newspapers, and as of 9am, on the Creative New Zealand website. Was there anyone left who didn't know?
You might suggest that it doesn't really matter. The important thing is surely that we're going again, thanks to the Government seeing fit to (partially) fund continued New Zealand representation at Venice, even though it wasn't quite what they expected in 2005.
And despite slight personal misgivings about a proposal competition in regards to the selection of artists for Venice, one would no doubt agree that the artists who have been confirmed for 2009 -- Francis Upritchard and Judy Millar -- are an excellent choice. Hope we see their work back home in New Zealand as soon as possible afterwards; who cares how, or when, we found out about it. (Although if you were one of the artists whose work wasn't selected, and you found that out on the internet, you might understandably feel a bit grumpy. I understand that the All Blacks used to have a similar problem under John Hart, until they sorted out their communications processes.)
All the same ... you might possibly have wondered, like me, whether Hans Haacke had to submit a detailed proposal, with accompanying budget and agreement to speak nicely to the media, before he made his iconic Germania installation at the Venice Biennale in 1993, or whether the Americans insisted Louise Bourgeois ("I want to bother people, I want to worry them") explain in writing beforehand how a show of her work would be relevant to the context of the event. (Although presumably that's what the curators are for.) Though equally one might prefer to stop carping, take the anti-Kantian view, and just say, good result.
But overall you might be left wondering why such a stink always seems to ensue when Venice looms on New Zealand's cultural horizon. Are the various controversies and opinions which surround it simply a measure of the cultural importance of the event? Or perhaps it's the sheer scale and cost of the business -- piddling though it is in anything except arts terms -- which means that almost everyone, variously elite or grassroots, supporter or hater of the arts, mainstream media outlet or blog, has both an interest and frequently a point of view about New Zealand's participation at the Venice Biennale?
Bestof3 has pointed out that press coverage of this morning's announcement focuses not on the art, but on the dollar values involved. Art for its own sake of course is never news: it's the money! the sex! made of poo! painted by a chimp! factor which gets art into the first section of the paper. While et al's participation was extremely well-received by the international art audience, last time we had endless nonsense spouted in the popular New Zealand media about braying donkeys, toilet art, and artistic anonymity, as well as heated debates about how New Zealand identity should be represented internationally (something we've been worrying about, one way or another, since the 1930s). The review commissioned by Creative New Zealand into our participation at the Venice Biennale (read the whole 145 pages here... gulp) commented that:

"The main failing in the 2005 effort was anticipating and managing the negative reaction that the choice of artist received in some domestic media – particularly in Wellington. The associated controversy found its way into the political realm. It should be noted that CNZ and the creative team had an explicit domestic communications strategy in place, but the media persisted with negative coverage. Continual improvement is required."

Naughty old media. I wonder how it's going to play back home this time.
Posted by Cheryl Bernstein at 3:16 PM