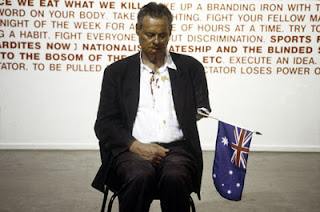 In the last couple of days, I've been thinking about Mike Parr's work for the current Sydney Biennale, MIRROR/ARSE, a dramatic presentation of the video documentation of his gruesome bodily performances, staged in a decrepit abandoned building on Cockatoo Island in rooms that stank of piss and worse . Here's how the Biennale website describes the context for viewing the work:

"Just as the viewer’s encounter with the architecture of the space is traumatic, so do Parr’s works explore trauma and subjectivity. Parr, in the great Expressionist tradition, denounces and is outraged by the brutality of the world we live in. He is revolted by it, and creates poignant artworks where the viewer is confronted with revolting situations, hopefully achieving turns that form consciousness."

Interesting, then, to have popping up in my feedreader on the same day, journalist Christopher Hitchens's account of subjecting himself to a waterboarding session at the hands of hooded ex-Special Forces personnel, in order to better understand the "human cost of America’s use of harsh tactics at Guantánamo and elsewhere". If you're so inclined -- and be warned, you'll need a stomach just as strong as the one Mike Parr's audience required out on Cockatoo Island -- you can watch what Hitchens put himself through here, and read what he made of it all here.

Not my kind of thing at all, but I was interested particularly in the collision here between popular culture, in the shape of Hitchens's column in Vanity Fair, and high art, in the body of Parr's work. Not much difference between them, sometimes. Similar tactics, similar results. And both play their part in forming consciousness.
Posted by Cheryl Bernstein at 2:16 PM