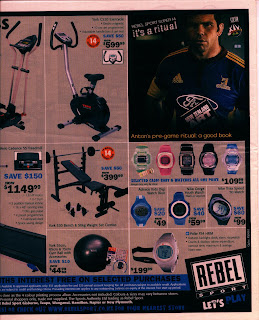 I would probably describe myself as a delicate shade of pistachio rather than the full green, but after seeing a press photo of the local man who kept his junk mail for a year (the pile was taller than he was), some time ago we slapped a peremptory "NO JUNK MAIL" sign on the letterbox to do our bit for global warming. Or something. (Actually, given the temperature here today, I think "Global warming?" -- bring it on. At minus 2 degrees, sacrificing Niue to the rising oceans looks like quite a viable option.)

It's interesting, actually, what still gets posted in our box: it seems that real estate agents and political candidates of all persuasions consider their ridiculous literature to be exempt from "junk" status, as do school fundraisers, semi-literate peddlers of "herbal diet systems", and the occasional religious whack-job. (I tend to slip pamphlets from the latter into the big guy's jacket pocket to give him at least one inspirational moment during the day at work.) But I digress.

To combat the negative reception at the mail-box, corporate marketers have taken to slipping their filth into the newspaper. And it seems we are powerless to resist. Still half asleep at the breakfast table, I commonly find myself reaching for the Briscoe's semi-annual sale mailer in preference to the "World" section of the paper. Rather than initiating intelligent peppery discussions about the precarious state of democracy in Zimbabwe, I hear myself idly wondering aloud if a certain kind of wine-glass ("stemware" in the foul language of variety stores) is cheaper at Moore Wilsons. But that's the global capitalist system for you in a microcosm ...

Anyway, I was interested to come across a mailer from Rebel Sport in which New Zealand art played an unexpected role. The theme of the mailer was "It's a Ritual", which they helpfully defined for their readers: "A detailed action followed faithfully in order to bring luck". There were shots of various pre-game rituals among rugby's Super 14 stars: All Black Daniel Carter gazing philosophically at his "magic boots"; Rodney So'oialo tuning out with his headphones on; Sitiveni Sivivatu's "power breakfast" (a handle of beer; bet they wouldn't use that shot again in a hurry after the recent drunken shenanigans). But the one which particularly caught my eye was All Black hard man and philosopher Anton Oliver's pre-game ritual -- "a good book".

It's a bit hard to see in the image above due to my dodgy scanning capabilities, but if you look carefully you'll see that the book Anton is clutching is titled New Zealand Art. (He is renowned for visiting art galleries on tour with the All Blacks, and even studying art history briefly at Otago.) The book cover has clearly been knocked up by the ad agency's art department to get the humorous point of Oliver's obsession across to Rebel Sport's customers, but the greyed-out image is another matter. I'm thinking possibly one of Peter Robinson's percentage paintings from the mid 1990s. But it could be anything really.

Oliver's high-brow extra-curricular interests were in the news a couple of years ago when he posed nude for a painting by Dunedin artist Simon Richardson, at which time he was described somewhat forensically as being "well-known for his fondness of art". An enterprising reporter from the Sunday News rang rugby legend Colin Meads for a comment after the news about the painting reached the media.

"We're meant to be salt of the earth, down to earth, grassroots, bloody good guys. You don't pose bloody nude, or get a painting of yourself in the nude. Hell's teeth, he must think he's pretty good. He must be well-proportioned. Is he? I'd be bloody nervous it would shrivel away."

Posted by Cheryl Bernstein at 8:06 AM

Email ThisBlogThis!Share to TwitterShare to FacebookShare to Pinterest
Labels: art and advertising, art and the media