One of my favourite British TV characters of recent years is the Hon Francis Fulford of Great Fulford, Devon, the foul-mouthed patriarch of one of the oldest aristocratic families in Britain, and possibly the first member of the British upper classes to go for a warts-and-all reality TV documentary on his family in order to raise some much-needed cash: if you missed The F*cking Fulfords when it screened on TV a couple of years ago, and are a fan of stately homes, swearing, bigoted rants and British history, you may enjoy a quick perusal of the few clips available on YouTube. Stalking his estate with a metal detector hoping to find coins dropped by an ancestor in order to pay off his overdraft, cursing Germans as if the war were still raging, Fulford's like an unfeasibly posh version of Alf Garnet. (“Crisis point? I wouldn’t call this a crisis point. One of my ancestors was hung, drawn and quartered in 1463. That’s what I call a fucking crisis point.”) Here's a typical blast of Fulfordian invective, in which he reminisces about his schooldays at the minor public school Milton Abbey in an interview with Hugo Rikind:

“Fantastic place,” he rumbles. “Still going. Has a ferret block bigger than the science block. Think it’s the only school where you can still take your dog.” He had one German friend there, whose nickname was 'Nazi'. These days, he feels, people are too sensitive about nicknames. “Judges are ridiculous. Tell somebody they’ve got nice tits, and they’ll make you give them a million pounds. Ridiculous.”

Devon's answer to The Osbournes was popular enough for the unreconstructed Francis Fulford (also known as F*cker Fulford) to be allowed to make two more TV shows, both documentaries written and presented by himself: Why England's F*cked and Why America Sucks. According to Fulford, England's problem stem from the 'fact' it's lost its cultural identity as a nation because the rest of the world were jealous and copied it. With over a thousand years of Fulfords residing at Fulford Manor behind him, his brief to chronicle the iniquities of the present day is wide-ranging: at one point Fulford visits a decrepit inner-city concrete tower block estate and strikes up a conversation with the kids hanging about in a grafittied concrete wasteland ('Ah, yes, the upper classes and the working class have always got on famously. Say what we like. Don't give a fuck what anyone else thinks.') in order to expound his theory that modernist architecture is essentially inhuman. He's joined by an intense young architectural historian in horn-rimmed specs, who is anxious to point out the aesthetic history of the buildings, while the kids on the estate agree forcefully with Fulford that it's a truly horrible place to live. It was thought-provoking television.

Francis F*cker Fulford's visit to the council housing estate came to mind in relation to a couple of recent architectural stories: firstly, the gradual rehabilitation of brutalist architecture in Britain which has been signalled by the popularity of a Le Corbusier exhibition at the Barbican, a modular brutalist complex inspired by the architect which only a matter of a few years ago was voted Britain's ugliest building. For decades, Le Corbusier's name has been synonymous with the failed modernist concrete housing complexes which have fallen into disrepair and in some cases, been torn down, in inner cities across Britain; now, it seems, there is a revival of interest in the aesthetic and its possibilities for regeneration.

I can't imagine the rehabiliation of concrete brutalism is something that Prince Charles, on the other hand, would much go for: he is an outspoken critic on the evils of modern architecture, that 'monstrous carbuncle' on the face of cities which he regards as both cavalier and inhuman.

"We must come to regard the characteristics of traditional architecture as not merely unfashionable political statements, to be thrown out with yesterday's rubbish along with the baby and the bathwater, but rather as organically adapting creation over the passage of time, helping us to generate and regenerate places that relate to our essential humanity. I know you all know what I mean in your heart of hearts - its just that so many of us are terrified of being thought of as old-fashioned, out of touch and 'not modern'. Don't worry. I've already volunteered for this particular task," he said in 2005.

Exasperated by the failure of contemporary architects to work to his anachronistic brief, the Prince recently rolled up his sleeves and got on with the job himself, designing a firestation at the Dorset village of Poundbury. The result hasn't met with universal acclaim: the architecture critic of the Guardian has described it as 'Brookside meets the Parthenon -- a dumpy neoclassical Georgian palace with three garage doors attached to it.' Others have called it a 'scale model of Buck Palace'. 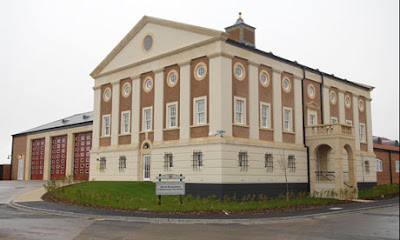 Prince Charles's firestation, photograph by Phil Yeomans/BNPS, via The Guardian

While most of the model village of Poundbury (which is due to be completed in 2025 and will house about 5000 people) is designed like the firestation in the 'humanistic' Georgian style, it seems the aesthetic's not immune from the social problems which plague the inner cities' brutalist concrete jungles. Here's what I presume is Poundbury's bus stop in the neo-classical mode, pictured recently in the Mail. 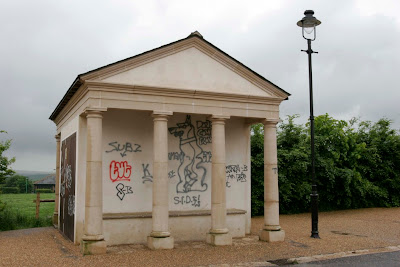 Wonder what Francis Fulford would make of that.