My problem with video art 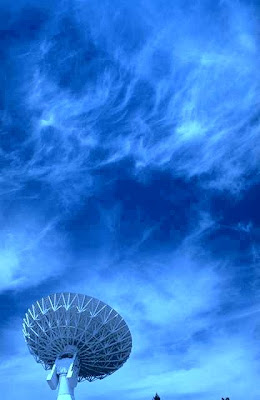 Transmission has been patchy over the past ten days or so, while I have battled against such major handicaps to blogging as the due date of a large essay and the children and I falling sick one after the other in an endless domino loop of coughing and nose-blowing. (Possibly not unrelated.) The result has been a kind of intellectual rain-fade; a radical attention-span deficit not at all conducive to sustained blogging: indeed, though somewhat luxurious, watching the back-to-back episodes of Coronation Street saved up during my period of enforced TV abstinence has proved quite intellectually demanding. Between bouts of surreptitious sniffing at the sad demise of Vera (even the big guy was suspiciously red-eyed), I've been hard-placed in recent days to string more than one coherent sentence together, and even that's been pushing it at times, much like the baby, who is at the stage of pointing wildly at things she would like to be handed and shouting 'That! That! That!' with an ever-more indignant tone in her voice. Twitter, a form of micro-blogging which allows you to write in only a 140 character maximum, has proved the perfect distraction.

I'm predicting the usual massive take-up by New Zealanders of this new form of communication technology: perhaps our geographical position at the end of the world makes us increasingly conscious of keeping in touch. Many New Zealand art bloggers are already tweeting away, as are several public New Zealand art galleries and museums (including Christchurch Art Gallery, who've announced they're about to start twittering on 6 April), and a couple of prominent local artists. I'm enjoying it. Twitter's like a collective stream of consciousness to which you can add and dip into when you have time and inclination. Far from being a way of holding the world at arm's length, it's a new way to become intimately involved with it.

Some of the ideas tweeted by others, and the links posted, have been useful for my studies (@Pareidoliac is a particularly effective and generous connector of ideas, people, and writings). Others have made me laugh, a lot: I suspect it will be hard this week to trump @BadTom's comment that with an outing in the weekend he has managed to bring the cost-per-wear ratio of his top hat down to double figures. Other tweets involve quite abstract and gnomic utterances, scraps from a plotless narrative thrown out and picked up like a discarded note found on the footpath.

There's a vaguely voyeuristic element to the window Twitter provides into people's private lives, or at least, the private selves they perform in the public space of the internet. (Twistori , a spin-off site which reveals in real time what people are loving and hating, feeling and believing, thinking and wishing, is particularly interesting. It's like a model of human consciousness, developing in real time. 'I wish I could make up an ingenious conspiracy.' 'I wish it would stop snowing.' 'I wish it was summer and I could lay in the sun and drink whisky and listen to Metallica in Helsinki'.) Luckily for my present purposes Twitter requires a very short attention span indeed, yet presents a worthy enough challenge to compose vaguely interesting utterances in under 140 characters.

A friend who now manages young people's programmes at the National Portrait Gallery in London once said to me that she always structured her lessons around a commercial TV hour. She would break the learning into roughly ten minute chunks followed by a brief change of pace, as she believed that adolescents were unable to sustain concentration for any longer than the TV programming time between advertising segments. In New Zealand, at fifteen minutes in any hour the advertising load is one of the highest in the western world, and I've sometimes wondered if this is the explanation for my own rather poor concentration span; which is never more evident than when it comes to video art.

When I read descriptions of video installations like this, even though the artist is Gary Hill and therefore the work is likely to be quite interesting, I quake in my boots: 'So seven works spread out on different week days are quite difficult to get to. You have to be keen – especially if you don’t work in town – but so you should, they are worth it.' Gulp. Even if I lived in Auckland, I know I would be hard-pressed.

It's not just that it's on a screen, and therefore that I'm conditioned to regard video works as entertainment, which I initially suspected might be the exceptionally shallow root of my longterm problem with video art. No, it's that video art seems to demand such a lot from its audience. Time, stamina, multiple visits: I suspect it's only something that someone without small children in tow could possibly countenance. I have a readymade excuse now, of course, but I'll admit to never having been too keen. If a video work is rubbish, or dull, or generally not worthy of your attention, you have to have watched the whole jolly thing to know that. A dull painting or a sculpture, however, you can move on from immediately. 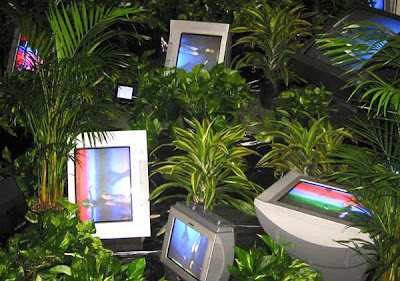 There are many, many video works I think are terrific: for example, anything I've ever seen by Bruce Nauman. Stella Brennan's exploration of the Mt Erebus tragedy. Sean Gladwell's skateboarding Storm Sequence. And I've had some really great video art experiences: hovering about in the darkened flickering light of Nam June Paik's TV Garden upstairs at City Gallery. Being revolted by Paul McCarthy downstairs. Up against Thomas Demand in Sydney. The Daniel Crooks installation at the Christchurch Art Gallery last year was one of the most extraordinarily immersive art experiences I've ever had. Among New Zealand artists, video works by et al, Lisa Reihana, Sean Kerr and Steve Carr never seem to feel demanding of my time as a viewer: instead, I've been delighted to give it, and have always felt hugely rewarded for doing so.

I came across these remarks on video art by Christian Boltanski the other day. I suspect that by his definition I most enjoy the video works that are like paintings, that describe space rather than take up time.

The big difference between painter and artist is that some art is to do with space and other art is to do with time. Music, literature or theatre, these things do something with time. Painting does something with space. When we see a movie, there is a beginning and an end, most of the time. When you see a painting, you can look at it for ten minutes or six hours, and you can move around. The big "cut", in terms of media, I think, is time or space. There are some artist videos, like Bruce Nauman's, which are more like painting, really, because they are a space product, like sculpture. But there are also artist videos that are more like cinema, because they have a beginning, an end, and we sit down to watch them.

My problem with video art is that I always feel a bit anxious in approaching it. I'm apprehensive that it won't repay the time I spend with it, that somehow I will go away feeling that I have wasted my time on something I don't much care for. Which is a pretty ridiculous anxiety, when I stop to think about it, given the amount of time in my life I've spent watching TV. Or reading submarine novels. Or writing nonsense on Twitter. (Interestingly, John Hurrell, the critic who recommends Gary Hill's show so warmly, doesn't have a TV. I think this may be significant.)
Posted by Cheryl Bernstein at 12:16 PM

Glad I could make you laugh! I still can't quite think of Twitter as "micro-blogging", partly because my experience as a blogger has involved extensive research, lots of links, original maps & graphs and sometimes thousands of words. That means that 140 characters is so far from my idea of blogging that at best it could be called "nano-blogging".

But really, in my experience it's much closer to a chat room than any form of blogging, though with perhaps slightly less expectation of instant replies. Some people do "blog" with it, either via imparting useful information or through pithy wit. But it seems to me that on the spectrum from publication to conversation, it's much closer to the latter.

But back to video art. Your post instantly reminded me of the inlay notes from Brian Eno's "Thursday Afternoon". Specifically, these lines here:

"So long as video is regarded only as an extension of film or television, increasing hysteria and exoticism is its most likely future. Our background as television viewers has conditioned us to expect that things on screens change dramatically and in a significant temporal sequence, and has therefore reinforced a rigid relationship between viewer and screen - you sit still and it moves. I am interested in a type of work which does not necessarily suggest this relationship: a more steady-state image-based work which one can look at and walk away from as one would a painting: it sits still and you move."

Omg, "nano-blogging" yeah i like this term very much Tom!

I don't have a tv set Cheryl though I find I can get most things online from tv.

I think what I like about things like youtube and twitter is the many-to-many structure of communication. Set within the membrane that is the Internet (which @fadereu got me thinking of in terms of a bridge between the biosphere and ionosphere), this many-to-many distribution of expressions also amounts to a co-existence of multiple times, individual presences or durations.

TV on the other hand whilst still caught up in a one-to-many broadcast model of communication imposes a strict temporal frame that is more about a single time than multiple co-existing times.