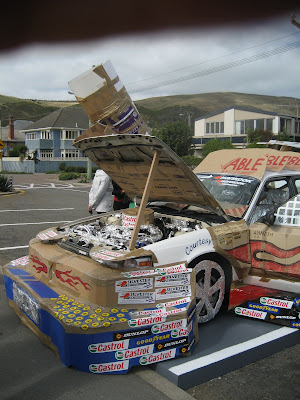 Drove en famille out to Sumner yesterday to take in Thomas Hirschhorn's Poor-racer, an event in the One Day Sculpture series perfectly conceived for Christchurch, the unabashed boy-racer capital of New Zealand. The sound of the suburbs is no longer lawn-mowers and leaf-blowers, as the recent promotion of the Ellerslie Flower Show would have you believe, but instead the "Psssht! Pssht! Varoommmm" of a customised Mazda Familia accelerating at speed. (Rather appropriate, I felt, that they turned Hagley Park into an enormous grassy carpark for the occasion of the garden show.) The small guy had complained about coming to see the sculpture, suggesting that a car covered in cardboard would be boring. "What is it? A car covered in cardboard? Did he use blue-tack or sellotape to stick it? It's a car, and it's cardboard. Not interesting."

But when we saw it, it was. Actually, the small guy's eyes lit up. It was parked nonchalantly about halfway along the Esplanade towards Scarborough Hill: a lowered modified car pimped with gigantic cardboard sideskirts, spoiler and insanely large hood scoop (or perhaps intercooler? I'm no expert, I just live here), and tin foil mags plus internal stabilising bars made out of what looked like toilet roll inners sellotaped together. The bonnet was raised to show engine parts 'chromed' with more tin foil. It looked driveable, but only just. Ridiculous and entirely wonderful, its obvious painstaking labour out of all proportion with the results, Hirschhorn's low rider was like a school project on steroids, its materials unfit for its ambitious conception. I couldn't decide if it was a monument to heroic failure, or just plain heroic. It reminded me a lot of Marie Shannon's photographs of her own 'unworthy objects', like her model house or the 'museum of cat fur'.

A coldish easterly had blown up along the beach, so the usual hordes of girls in bikini tops and board shorts and guys in wet suits a size too small queueing for the sole public dunny were conspicuous by their absence. We parked a couple of spaces down from the work and got out. A car slowed down as it passed by on the Esplanade, pale faces pressed to the windows.

There were a few people milling around the pimped cardboard car with a vague sense of purpose as we approached. An unlikely and diverse group. Half a dozen puzzled elderly punters who'd cut their Sunday constitutional short. A plump young guy with a curly mullet and nylon soccer shorts. The cultural attache from the Swiss Embassy; curator Danae Mossman; a couple of bleary-eyed young artists who'd assisted with gaffer tape and tin foil through the night, sitting on a tartan picnic blanket; the artist, tall and thin and dressed in black, chatting with all-comers. 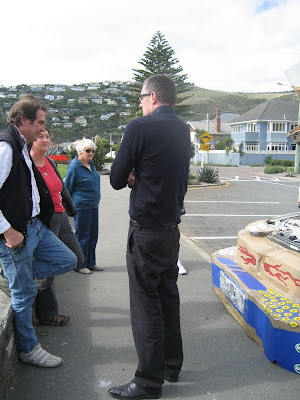 You can always feel a tension at that kind of moment, looking at a new public work of art. The people already there have already bonded in a purposeful kind of way; as spectators or fabricators, they have formed themselves into a group united by mutual interest in the physical proximity of a peculiar object; the person who made it is standing there too; you arrive in their midst as a stranger; what will you bring to the mix? To get my bearings I walked round the car, and had a look at the detail -- the cardboard steering wheel, the fruit tray like a little mat on the passenger's side floor, the flames emblazoned in magic marker -- and took a few photos, and thought about it for a bit, and then was introduced to the artist. "Great work," I said. "Thanks for coming out." "Thank you," he said. I opened my mouth to speak, trusting that something vaguely intelligent and penetrating would come out. Suddenly I was aware of a strange sensation behind me. It was the small guy, who'd momentarily escaped from his father and had crept up to ping the elastic of my underpants. "Snap! Snap!" it went.

Hard to sustain the serious art thing after that, and probably just as well. 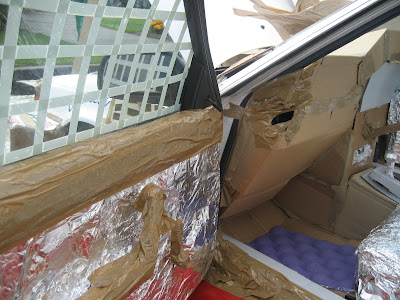 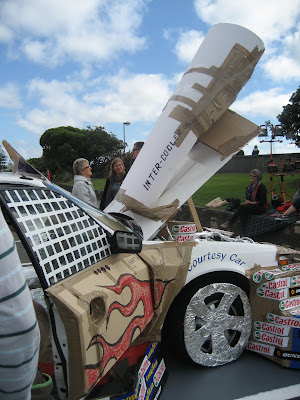 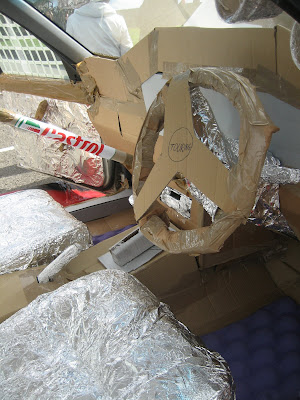 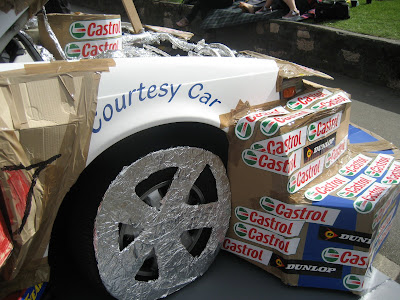 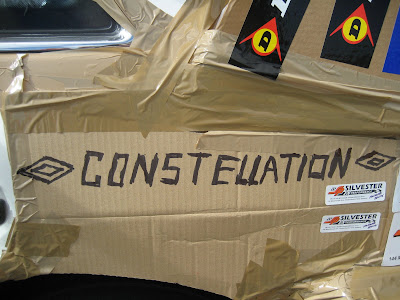 Here what the artist has to say. Thomas Hirschhorn:

"I am interested in the Form which is created by customising or tuning a car. The fact of personalising one’s own ordinary car in order to give it a unique individual touch is the revolutionary gesture of everybody, without exclusion. Customising or tuning is an act of resistance to the non-written laws of all kinds of exclusion. In the desperate and useless act of car-tuning I see a form of resistance throughout form. And as an artist - what can interest me more than Form?" 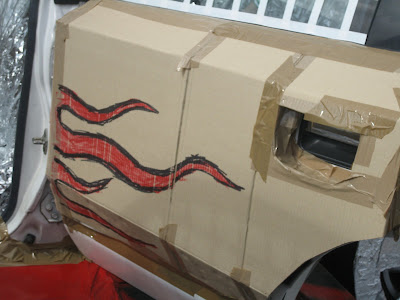 (Perhaps I should consider the underpants tweak as the small guy's own personal act of resistance to looking at art in the weekends.)

Posted by Cheryl Bernstein at 7:13 AM