Taking one for the team; or, Never mind the Pollocks 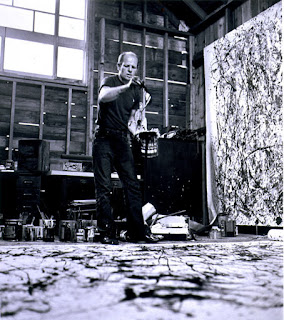 One of the great advantages of having retired from the corporate life is that I no longer have to participate in team-building exercises. As it was, I generally had to be forced to do so almost at pistol point; I am not one of nature's joiner-inners, particularly where there are humorous relay-races, group problem-solving activities, or anything even remotely hinting of theatre sports on the agenda. I am much less interested in breaking down barriers than in strictly maintaining them at all times, for everyone's personal safety and peace of mind.

But it's all behind me now. No more forced jollity with people you'd rather cross the street to avoid. No more "breaking the ice" with a revealing personal introduction when the bean bag is tossed to you, or "learning to trust" (as if!) one's appalling colleagues on some muddy assault course, or being "forced out of one's comfort zone" when the kayak overturns in the choppy waters of the Abel Tasman. (Of course, one might argue that every day at home with small children is a team-building exercise of a sort. Certainly I often feel at the end of the day as if I have completed half a dozen army assault courses in the company of some fairly insubordinate underlings. But at least I am the boss, and if I say no beanbags, then that's how it is. OK?)

This week I'm feeling a bit sorry for the big guy, who is being made to go on some dreadful Olympic-themed team-building exercise (Special Olympics more like). I can only imagine the sheer Ricky Gervais-ish vileness of it all. The red team. The blue team. The jolly facilitator. The sweaty fool from IT. The cringeworthy sad sack dying to show leadership qualities. The bouncy slide. The bean bag toss. The curling ham sandwiches and stewed Cona coffee. The horror, the horror.

A friend once did an art-themed team-building day with his office. One of the activities involved collaborating as a group on a Jackson Pollock-esque drip painting. Needless to say, the results were not good; the resulting "artwork" looked like the floor of the gents after a drunken paintball fight. (Which on due reflection might have been an entirely appropriate result; Pollock himself was renowned for sprinkling it about. As well as for being a CIA stooge. But I suspect he wouldn't have suffered team-building lightly.)

Today is the 52nd anniversary of Jackson Pollock's death, which took place behind the wheel of his mint green 1950 Oldsmobile 88. 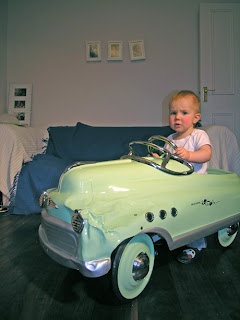 As you raise a glass to him tonight, you might want to reflect upon some of the tributes various artists have made to his memory. 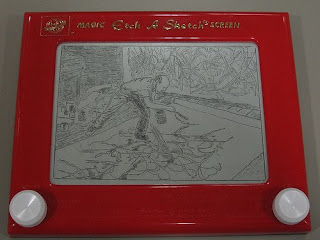 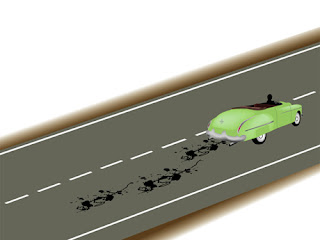 Onkar Kular (again): The End of the Road, proposal for a Sony PSP car racing simulation game in which players choose from a range of 20 drivers and corresponding automobiles all based on famous celebrity car deaths. Pollock's Oldsmobile has a special "abstract expressionist oil spill option". 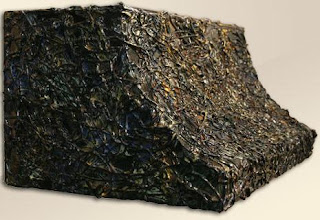 Or you could always while away the afternoon on your own drippy masterpiece.
Posted by Cheryl Bernstein at 9:02 AM

Art and corporate team building is happening closer to home: I've just visited the Govett-Brewster Art Gallery and came across teams competing in a corporate challenge within the gallery.

That is very, very disturbing. Blue Team: line up behind 'A Flip and Two Twisters'. Red Team: see how many words you can make by rearranging the letters of '“Everyone will live quietly” Micah 4.4'.