They paved paradise and put up a parking lot 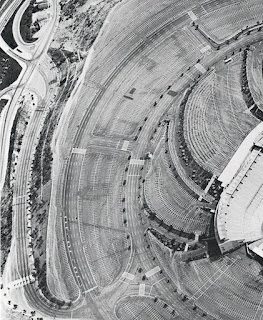 News that Ed Ruscha and his friend Laddie John Dill are battling the City of Los Angeles over the right to keep working in their open-air studio in Venice Beach (cue Joni Mitchell -- yes, the city wants to put up a parking lot) has prompted a flood of op-ed pieces, mostly coming down on the side of the artists. While the New York Times comments: "The project has quickly emerged as a fight between the artistic values that led to the renewal of Venice and the commercial interests that are reshaping the community’s character," the local Venice Paper queries: "Has Venice become a place that values asphalt more than two artists who have made huge contributions in making Venice Venice. Must we rush so quickly to mediocrity?"

The problem, as ever, stems from the gentrification of the district, following the usual scenario in which artists in search of cheap space and interesting architectural character move into a run-down area, inadvertently make it fashionable, push up the property prices and have to deal with new demands for the shabby spaces no one previously gave a second thought to, as well as navigating neighbourhood streets suddenly clogged with MumVees and mobile coffee carts and developers in Porsches. (Like Grey Lynn fifteen years ago, or Mt Victoria ten; though they're still waiting on Linwood...) 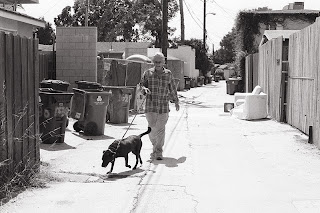 Laura Wilson, Ed Ruscha takes a break with Butch in the streets around his Venice studio, 2007, Wallpaper*.

I've been thinking lately about the way in which officialdom treats artists -- which seems to me something of a measuring stick for a society's degree of civilisation. (To this end, I'm keenly anticipating the impending launch of The Complete Written Correspondence between the Rt Hon Richard Meros and Creative New Zealand: Volume One.) With a few honourable exceptions, almost all of them to be found in the capital, NZ's record on bureaucratic artist-friendliness at a local level is pretty woeful. It's not that commercial interests need necessarily always to be pitted against artists: both are important in the lives of communities.

Why, for example, do city councils not work with developers to provide cheap studio space in otherwise unoccupied "land-banked" buildings? Keep the artists happy on the one hand; look at giving the developers a rates rebate on the other: the result being an interesting and attractive place for people to live. It's something that art collector James Wallace used to do with his buildings on the Auckland waterfront, pre the Viaduct development. In particular, the Christchurch City Council would seem to have a few possible sites on its books currently, courtesy of beleaguered property czar Dave Henderson.

Artists, bureaucrats and property developers generally come together, of course, when there's public sculpture in the offing. Lately we've seen the rise of the kind of slightly dubious public sculpture that stands as a memorial to something that's been knocked down in order to make way for the development which commissioned the sculpture. (It's been reported that a public artwork commemorating the historic air force base is on the cards for the new Ngai Tahu-developed subdivision at Wigram.) 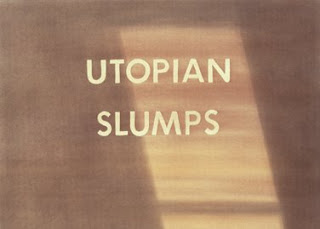 The old Arts Bonus Scheme in Wellington, however, resulted in several useful public works being attached to new developments, including the definitive Culbert/Hotere collaboration, Fault, on the exterior of the City Gallery Wellington. Regrettably the Resource Management Act has put paid to this sort of "percent for art" scheme in New Zealand: you're no longer allowed to get away with building an extra floor or two if you also put a decent work of art in the forecourt. National have said that they're looking at reviewing the Resource Management Act in relation to a number of issues, including urban design. I hope whoever's in the government benches come November does; the RMA is endlessly problematic when applied to public sculpture, and a complete minefield for artists to deal with.

Meanwhile, more power to Ed Ruscha's arm in sorting out his real estate problems in Venice Beach. He's not saying anything publicly about it of course: he never does. (If he were a New Zealand artist, the media would call him reclusive.)
Posted by Cheryl Bernstein at 9:10 AM

Email ThisBlogThis!Share to TwitterShare to FacebookShare to Pinterest
Labels: art and the media, Ed Ruscha