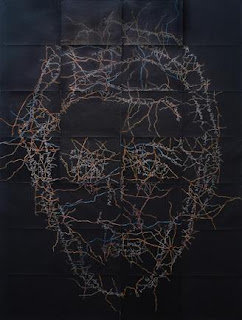 Self-portrait of the art critic: John Hurrell, Self Portrait I, 1993, acrylic and ink on paper maps

As I've mentioned before, I am no stranger to the stonkingly bad review. I know the heart-pounding moment as you open the paper to the arts page, holding your breath as you scan the review for words like "tour de force", "must-see" or "important"; followed by the sense of deflation and anguish as your eye instead catches on "disappointing", "inconsistent" and "unresolved".

I don't have to exert myself too greatly, then, to imagine what the staff of the National Gallery in Edinburgh must be feeling this morning after Richard Dorment's truly excoriating review of their exhibition, 'Impressionism & Scotland', appeared in yesterday's Telegraph.

Dorment (rhymes with "torment") opens by wondering whether the title of an exhibition can be reported to the Advertising Standards Authority for deliberately misleading the public. And it all goes downhill from there.

The work itself is terrible, reckons Dorment: the show "tells us nothing about Impressionism in France or in Scotland - but at least it confirms that even when French art hit rock bottom there was always some clueless Scot who could do worse." But the curatorial premise, it seems, is even worse: "At times it looks as though the curators tipped the contents of the storage areas of every museum in Scotland upside down just to see what fell out."

He concludes one of the most eyewatering reviews I've ever read by pointing the finger squarely at the two individuals he considers the prime culprits:

"The blame for this mess lies with the curator, Frances Fowle, who was also responsible for the unreadable catalogue. But the director general, John Leighton, is also at fault for not pulling the plug on this waste of time the minute he realised how flimsy the material in it was going to be."

Perhaps there's something rising in the global ether: over the ditch at The Art Life, the air is running blue as they tear strips off a guerilla advertising team, Mind Heist, who had the temerity not only to (a) monkey around with Martin Creed's Work no.850 at the Tate Britain, but (b) to attempt to pass off their nonsense as an interventionist art event. When all the time they were advertising running shoes.

And closer to home, art critic John Hurrell has pinned a large 'kick me!' sign to his back, asking his readers to comment on his own artwork which is currently being exhibited at the City Art Rooms in Lorne Street, Auckland. Owner-operators of galleries that also do framing, the Waikato Museum of Art and History, and Chris Heaphy, take note.
Posted by Cheryl Bernstein at 8:45 AM